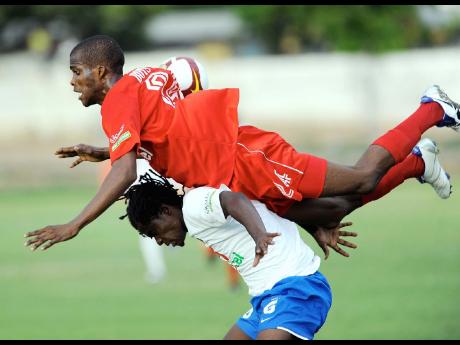 After failing to win a game since November 29, 2009, Portmore United yesterday pulled off a mild upset when they clipped title challengers Boys' Town 2-1 at Collie Smith Drive in third-round Digicel Premier League action.

Heading into the encounter in the second-to-last position, and needing to win to try and get themselves out the relegation zone, Portmore were put behind in the 15th minute when George Vernal headed home from inside the area.

The Boys' Town celebrations where however short-lived as an equally impressive flashing header from Portmore's Carlington Smith three minutes later and a Mario Swaby strike from the inside the box in the 36th minute gave the St Catherine-based team a precious lead - one they would hold on to until the end of the game.

"We were really hoping for a win today as after losing the first game of the round and tying the second, I was hopeful that we would win the third," said Portmore's new coach, Neville Bell.

"When you look at it, we have one of the best teams in the league on paper. The problem is we werenot winning ... . This is a good win and one can only hope that this is the catalyst that is needed to change our fortunes," he added.

The win was Portmore's first in their last 11 matches, with their previous win coming incidentally against Boys' Town at Ferdie Neita Park.

Boys' Town, in the meanwhile, who started the round in fourth position and 10 points off leaders Harbour View, were losing their third consecutive match of the round.

"My team is not playing like they want to win the title, so what we are doing at present is trying to blood the youngsters in the team, and today they gave a good account of themselves, especially in the second half," said a disappointed-looking Andrew Price, coach of Boys' Town.