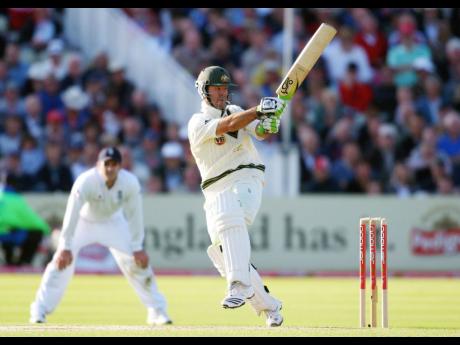 West Indies were condemned to a series defeat after Australia's captain Ricky Ponting stroked a fine hundred and led his troops to a fluent 50-run victory in the fourth one-day international (ODI) on Sunday at the Gabba.

Needing a win to keep the series alive, West Indies sent Australia to bat and could not prevent the home side from gathering a daunting total of 324 for seven off 50 overs, to which they replied with 274 for eight.

The result gave Australia a winning 3-0 lead in the five-match series, with the last match slated for Melbourne on Friday (Thursday night Caribbean time).

Windies captain Chris Gayle led a fairly sturdy start to the challenging run-chase, smashing a brisk 34 but when he fell and the score dipped soon after to 55 for three in the 11th over, there was little hope of the touring side pulling off an upset victory.

Gayle faced only 21 balls for his 34, laced with six boundaries.

Travis Dowlin (8) and Lendl Simmons (1) fell cheaply and a fighting 45-run fourth-wicket stand between Wavell Hinds and Narsingh Deonarine was terminated when the left-handed Jamaican was run out for 20.

Deonarine went on to score a career ODI best 53 off 69 balls with five boundaries.

Kieron Pollard lashed a typically aggressive 62 off 55 balls and shared in a 102-run seventh-wicket partnership with Dwayne Smith but the required run-rate was too demanding and the Windies sank to defeat although delivering their best batting effort of the series so far.

Pollard thumped four fours and two sixes in his top score and Smith finished unbeaten on 59 off 63 balls with three fours and three sixes.

Opening bowlers Doug Bollinger (2-44) and Ryan Harris (2-64) shared four wickets to lead the Australian attack, Bollinger enjoying the dismissal of the dangerous Gayle for the third time in the series.

Earlier, Ponting tormented the West Indies bowling attack by compiling his 29th ODI hundred and first at the Gabba.

The visitors' attack was under pressure from early and Australia seized control when Ponting linked up with Tim Paine for a stand of 52 for the second wicket before he added 131 for the third wicket with Cameron White.

West Indies were still competitive when Paine made 24 from 36 balls, but White hurt them with his 63 from 78 balls.

Gayle's side managed to drag themselves back into the match when White was caught at long-on in the 40th over off Nikita Miller's left-arm spin, Adam Voges was caught in a similar position for 16 in the 43rd over off Ravi Rampaul, and Ponting was caught at short fine leg in the 44th over off Smith.

At this stage, West Indies had reduced Australia from 226 for two to 252 for five, but a stand of 52 for the sixth wicket between left-hander Mike Hussey and all-rounder James Hopes restored the balance of power to the home team.

West Indies' fightback was snuffed out, as Hopes struck half-dozen boundaries in 42 from 21 balls, and Hussey made 23 from 17 balls in the closing overs.

The result sustained a fine run by the Aussies who went 9-0 against Pakistan in their recent Test, ODI and Twenty20 fixtures before whipping the West Indies by 113 runs and eight wickets, respectively, in the first two ODIs of the current series.