Trini to the bone 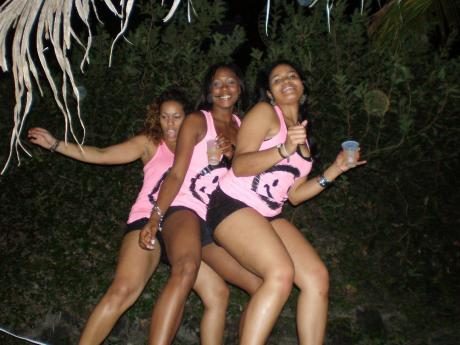 In the last few days, planeloads of Jamaicans have been landing in Trinidad and Tobago for its annual carnival. Jamaicans are not the only ones pulled to this wild event. People from Barbados, North America, Ecuador, Canada, France, England, Australia and many other countries have descended upon the larger of the twin-island republic. Unless you are fortunate to take masses of holiday, foreigners tend to arrive no more than a week before Ash Wednesday.

This year is my second time playing 'mas', as the Trinidadians say. My first was in 2007, after which I returned home vowing to marry a Trini! Three years later and I am! Hmm, what shall I wish for this time around? A Trini baby? I have one of those. Does that now mean I am one too?

Bacchanal Wednesday is a party well known to Jamaicans who have played 'mas' before. It's like the official opening night of their vacation. With Machel Montano and Destra Garcia, due to the recent arrival of her baby girl, out of the carnival performances this year, it certainly looked like things just wouldn't be the same without them. To some extent, this has been true when it comes to live acts, but Alison Hinds, Fay-Ann Lyons-Alvarez, Bunji Garlin, Kes The Band and JW and Blaze, who won International Soca Monarch 2010 for their blazing song
Palance
, have all held their own and pleased thousands of revellers. However, this cannot be said of the band Karma. There is even a fan club on Facebook called 'I Hate the Band 'Karma' (from Trinidad) they sing Crappy Music', which has given me the chuckles.

However, Carnival is not all about the stage, as there are numerous parties held throughout the Port-of-Spain area, and then some. The session I chose to attend on Carnival Friday (February 12) was Rise, which was held on the grounds of the secondary school Trinity College, in Moka Maraval. Unlike what we have back home, this was one of the many 'Cooler Fetes' which Trinidadians frequently go to. Basically, they are less expensive than the others, and you may bring your drinks in a (you guessed it) cooler. Teams of people, including my posse, were still walking in with theirs after midnight.

When I say the venue was strumming and humming with wildness, I kid you not. Clearly, this was the place to be if you wanted to party with the hottest of the youth. As some danced on top of cold boxes and others wined down to the ground, DJ High Fidelity played the hippest soca of present and past times. You can imagine my delight when a Trini man said to me, in his sing-song accent, "Ah fine yuh look like a reeeaal Trini, how yuh dress in short short pants, an bandana on yuh head, an how yuh winin' down so!" Trini to the Bone, I tell you!