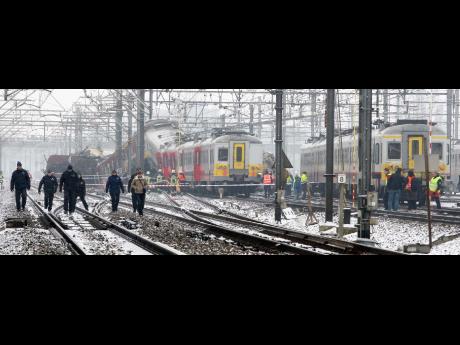 A commuter train ran a stop light during morning rush hour and collided head-on with another train in a Brussels suburb yesterday, killing at least 18 people and injuring 55 in Belgium's deadliest train wreck in decades, officials said.

The impact peeled away the front of one train car and threw at least one other off the tracks, causing amputations and other severe injuries, witnesses and officials said. Train service across Western Europe was disrupted.

The Flanders provincial crisis centre said in a statement carried by the Belgian media that at least 18 people were killed. Thirty survivors remained hospitalised, several of them in a "very serious" condition, the statement said.

Lodewijk De Witte, the governor of the province of Flemish Brabant, told reporters that one train "apparently did not heed a stop light."

The trains collided in light snow just outside of the station at Buizingen around 8:30 a.m. (0730GMT).