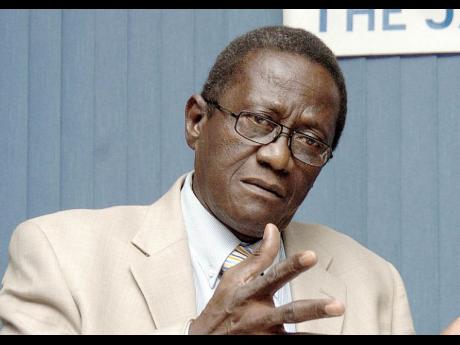 SHARP darts are being hurled at National Security Minister Dwight Nelson in response to his weekend outburst against last week's High Court decision to grant bail to three of four suspected kidnappers.

Nelson was criticised by members of the legal profession following yesterday's
Gleaner
report that he had spoken with Attorney General Dorothy Lightbourne in the hope that she would convey his concerns to Chief Justice Zaila McCalla.

Several attorneys, as well as the Independent Jamaican Council for Human Rights (IJCHR), sounded alarm bells at the revelation.

"This crass attempt by a member of the executive to interfere with the function of the judiciary is deserving of strong condemnation," declared attorney Patrick Bailey.

"It is becoming increasingly difficult not to conclude that the executive, the legislature and the police believe they can bully the judiciary into abandoning fairness to serve their ends," argued attorney Valerie Neita-Robertson.

While there had been no public comment from the parliamentary Opposition on the issue up to late yesterday, some of its members told
The Gleaner
that Nelson's comment was out of line.

Last week, 44-year-old businessman Trevor-Lyn Rowe was offered bail in the sum of $5 million, and 39-year-old Aldane Jackson was offered in the amount of $2.5 million in the case surrounding the alleged kidnapping of a St Ann businessman.

Twenty-seven-year-old Nickesha White was granted bail two weeks ago in the amount of $150,000.

Bail application for the fourth accused, Andrew Dillon, was denied.

"I know that many times a decision reached by a court leads right-minded citizens into the temptation of harshly criticising the court," declared attorney-at-law Bert Samuels yesterday.

"I have experienced similar outrage in the public where bail was granted to five men accused of killing a young man who was a witness in a pending murder case."

Samuels argued that similarly to the "uninformed right-minded citizens", Nelson was in no position to comment on the decision of the Supreme Court.

"Any hope that the minister may have that the Honourable Attorney General (Lightbourne) would have a serious talk with Chief Justice Zaila McCalla is interference or attempted interference with the independence of our judges and has constitutional implications," the council stated.

While the minister's comments drew heated reactions from members of the legal fraternity, no comments were forthcoming from either Lightbourne or McCalla.

The IJCHR urged Nelson to keep in mind that the judiciary was an independent arm of the state and the democratic principle of separation of powers was a mechanism to safeguard the rights of all citizens.

The organisation said it was recommending that Nelson concentrate his efforts on improving the investigative capacity of the Jamaica Constabulary Force, so that the courts can be advised properly rather than find fault with a judge discharging his judicial functions without fear or favour based on the material presented to the court.

Nelson on Sunday complained bitterly that the court's decision was frustrating to investigators who had pulled out all the stops to apprehend the suspected kidnappers.

The minister suggested that the Bail Act should be given more teeth to keep suspected offenders of serious crime behind bars longer, in keeping with a 2008 proposal by the Government.