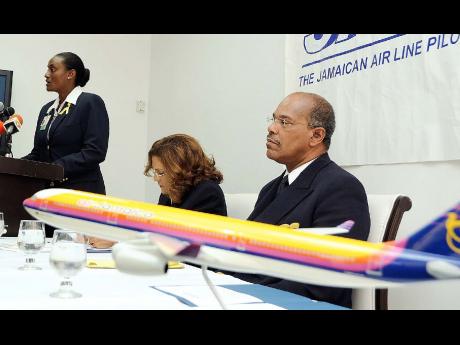 WHILE DECLARING its intention to maintain pressure on the Govern-ment to consider its bid for the national airline, the Air Jamaica Staff Acquisition Team has revealed it is considering starting up a new airline operation.

This 'Plan B', however, depends entirely on how the negotiations between the Jamaican Government and the Trinidad-owned Caribbean Airlines turn out.

The Government has said those negotiations would be concluded by March 31 and that the winding down of Air Jamaica would start on April 1 and close by June 30.

Captain John Ayre, manager - training and standards for Air Jamaica, told
The Gleaner
yesterday that while the other plan is in the works, the acquisition team, headed by the Jamaica Airline Pilots' Association (JALPA), will still be lobbying the Government.

Ayre did not say what action the group would take to stop the current plans of the Government before the timeline ends, but said his group would be fighting to the end.

"That is, the basis on which our bid offer is made is that it is an ESOP programme supported by more than $60 million of equity financing, not loan financing, and with that we believe we have the best offer," he said.

The divestment of the national carrier has stoked nationalistic passion with commentary from both sides of the fence.

Effective February 26, Air Jamaica will close its ticket office in New Kingston. The existing services will continue to be offered to passengers by telephone at the reservations centre, or in person at the ticket office at the Norman Manley International Airport in Kingston.

Specifically, ticket purchases will be handled as follows: