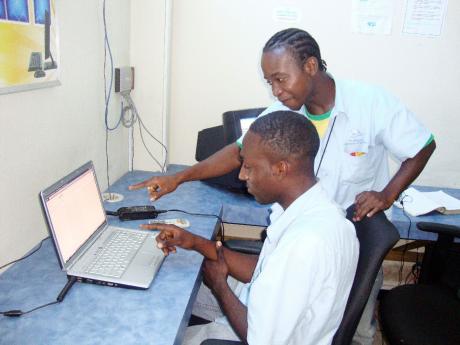 Shipping Association of Jamaica (SAJ) stevedores Deron Robinson (standing) and his colleague Dave Miller point to an article of interest during their session at the SAJ's cybercafé. - Contributed 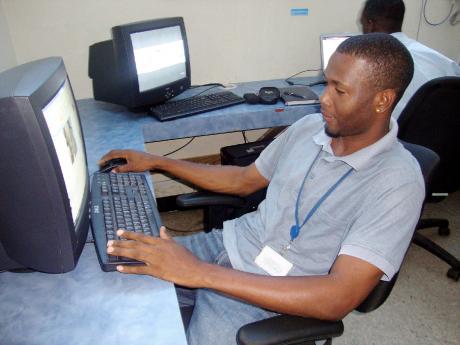 Seventeen months after the Shipping Association of Jamaica (SAJ) opened the doors to a cybercafé at its recruiting centre, the café continues to aid the stevedoring staff in furthering their education, as well as accessing information on the shipping industry.

The cybercafé, which was opened on September 24, 2008 to improve the flow of information to the stevedoring staff, is in high demand and is fully utilised seven days a week, according to Garfield Green, recruiting officer in charge of bookings for the café.

Green noted that between 11 a.m. and 4 p.m. daily, when some stevedores are on break, the four computers available for use are usually fully booked. Additionally, he pointed out that stevedores with personal laptops have unlimited access to the wireless service provided.

Terrence Brooks, operations manager - recruiting, who is the mastermind behind the establishment of the cybercafé, noted that training sessions on Microsoft Office Suite were conducted last year for stevedores and that plans are afoot to conduct more training sessions during the current year.

"We are hoping to offer a series of beginners training sessions shortly, especially for our pensioners who have expressed an interest in learning to use the computer," Brooks said.

Deron Robinson, a stevedore trained to operate the Straddle Carrier, who has been with the SAJ for six years, said the café has been beneficial to the stevedoring staff as it comes at no cost to them. He said he uses the facility to study and do research during his spare time.

"I have been accepted to the University of Technology to do a diploma in business management. I spend most of my time here researching the subject area and doing revision in preparation for the courses ahead," Robinson said.

His other colleagues, Dave Miller and Damian Jackson both concurred that the facility has benefited the stevedores.

Said Jackson, "the café has benefited the stevedores because a lot of us don't have access to the Internet elsewhere. The fact that it is free makes it even more cost-effective for us."

He added that coming to the café also allows him to interact with his colleagues. He mainly uses the facility to catch up on industry news and to conduct job-related researches.

Miller, who is a second-year shipping-logistics student at the Caribbean Maritime Institute, said the café facilitates research for class projects as well as research on industry related information. "I have had access to the Internet before, but having the cybercafé at work is more convenient. I live in rural St Andrew and the distance to travel between work and home is long, so coming to the cybercafé allows me more time to study," Miller said.