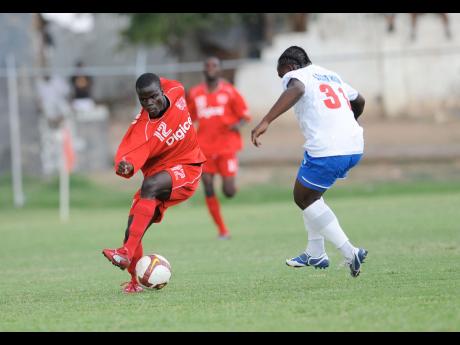 St George's College mid-fielder Marvin Morgan, who represented the Light Blues with distinction in his first Manning Cup season this year, will leave the island for England today for a tryout with English Premier League (EPL) team Birmingham City.

The 17-year-old midfielder will be on trial at the eighth-place EPL club's youth academy for two to three weeks. The club will cover his airfare and accommodation, along with other expenses.

Former Boys' Town player, O'Neil Thompson, made the connection with Birmingham City for Morgan while the schoolboy's agent, Darryl Powell, is handling the negotiations.

"I am looking forward to it a lot; it is a great opportunity for me. This is like a dream come true because everyone dreams of playing in the EPL," said Morgan.

The youngster had previously been rewarded for his impressive showing in the schoolboy season, with a call-up to the Reggae Boyz training squad ahead of their January 31st meeting with Canada.

He had also made the switch from Super League outfit Santos back to hometown team Boys' Town, where he made his Digicel Premier League debut on February 3 against league leaders Harbour View; and has featured in all his team's games since.

Morgan describes his set of games with Boys' Town in the top flight of local football as a tough experience.

"It is a tough season, a tough couple of games for me," he admitted. "The couple of games I have played I have put out my best and convinced the fans but I just did not get the victories that I desire."

However, Morgan believes the experience gained from playing in the local Premier League will give him the edge when he goes up against his peers at Birmingham's youth academy.

He will have to get used to his new environs and get acclimatised to the weather conditions, which has been forecast to snow for three out of the next five days.

Morgan said: "I won't have a problem with the cold because my mind has already been pro-grammed to deal with that, I am ready to face it."