'Reggae Boyz got lesson in concentration' 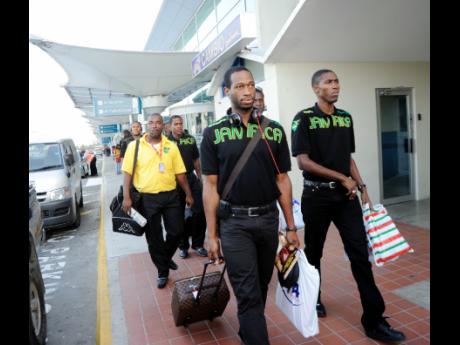 Reggae Boy Demar Stewart (left) and Adrian Reid (right) lead the Jamaican delegation on their way to the team's bus after returning from Argentina, where they went down 2-1 to the South American giants in a friendly international last week Wednesday. - Ricardo Makyn/Staff Photographer

CONCENTRATION, concentration, concentration. Demar Stewart, and his Reggae Boyz teammates, got a very good lesson about that in their friendly international against Argentina last Wednesday night.

"From this game you can take concentration. What I've learnt from this game is to concentrate more," Stewart stated intently as he drove home the point in an interview on a five-hour bus ride from Mar del Plata - where they had tackled the Argentines the previous night - to Buenos Aires for a nine-hour flight to Miami, en route to Jamaica.

The Jamaicans lost the match at the Jose Marilla Minella Stadium 2-1, after leading up to the 86th minute.

Ryan Johnson netted for the Reggae Boyz in the 68th minute with a well-guided header from the top of the penalty box, after being served a high cross from Lovel Palmer.

However, the Jamaicans conceded an equaliser four minutes from time when Martin Palermo also scored a long-range header from the top of the penalty box. In the final seconds of extra-time, substitute Ignacio Canuto netted the game-winner from a goal-mouth melee.

"Collectively as a group, it's a learning process, we just learnt to concentrate more. We had the game, we had Argentina 1-0 for up to 86 minutes and we just let in two goals in the last five - plus stoppage time."

Stewart, a central defender who formerly played for Portmore United, has been playing in China with top-flight team Chengdu Blades, for the last two seasons.

When he first joined the team, they had just been promoted to the 16-team league in the 'Land of the Orient', and like most newcomers, "just survived relegation." In the just-concluded season though, they showed remarkable improvement to finish sixth.

Stewart came on during the last 20 minutes of the match, but played the unfamiliar role at right back. He said a match of that calibre is good for the advancement of the national senior football team, which is being geared towards qualification for the 2014 World Cup Finals in Brazil.

"It's a good experience to play against Argentina. I can definitely take this experience and learn from it, and coming out of this game I can say I am a better player than I was yesterday because I will use this experience to build; and it also motivates me to work harder," Stewart pointed out.

The Argentinians are a world soccer power, having won the World Cup twice. They also have some of the world's best players, including World Player of the Year, Lionel Messi, who represents world club champions Barcelona. The South Americans' coach, Diego Maradona, is also rated as one of the game's greatest players ever. They are a regular World Cup Finals fixture and currently hold a number-eight FIFA ranking.

The Reggae Boyz, in the meantime, have only made it to the World Cup Finals once, in France 1998 when they also tackled Argentina in their last senior meeting - that the South Americans won 5-0. Jamaica currently hold a FIFA ranking of 78.

Pointing to the benefits of such meetings, Stewart explained: "For the whole performance and development of the team, it would be good to get games of this magnitude in the near future because the team can only get better and it will expose the players and give them experience to build their confidence.

"We're in a rebuilding process, the team and the coaching staff did well in this game and I think we defied the odds by going down there and giving this performance," added Stewart of a match that provided a lesson for him and the Jamaica team in concentration.