'There is no wiggle room' 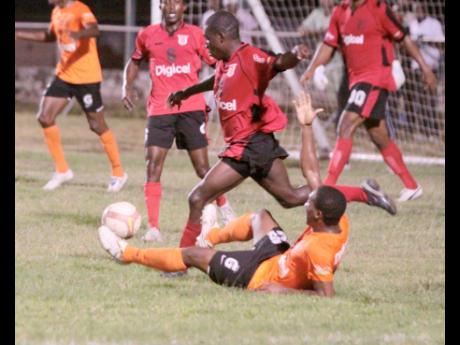 Tivoli Gardens' Keammar Daley (on the ground) appeals successfully for a penalty after being pulled down in the penalty box by Arnett Gardens' Lennox Creary (centre) during their Digicel Premier League match at the Anthony Spaulding Sports Complex on Sunday. Tivoli won 1-0 off the penalty kick, taken by Navion Boyd. - Anthony Minott/Freelance Photographer

Tivoli Gardens assistant coach, Max Straw, said his team is not letting up in its quest to overhaul leaders Harbour View in this year's Digicel Premier League.

"There is no wiggle room. Harbour View have a three-point lead on us with a game in hand. we have to take each game at a time and try to get maximum points," Straw said.

"We really wanted the three points. any team that wants to win the Premier League has to be solid."

Straw made those comments after his team clipped last-place Arnett Gardens 1-0 at the Anthony Spaulding Sports Complex on Sunday.

Tivoli moved to 48 points and are three behind leaders Harbour View, who ambushed Waterhouse 3-1 at Waterhouse Mini Stadium.

The all-important goal was converted by Navion Boyd in the 38th minute from the penalty spot. Keammar Daley had earned the penalty after he was pulled down in the box by Lennox Creary.

There were encouraging signs for the Junglists, given the way they attacked the Tivoli goal in the second half. However, the West Kingston team's defence stood up well under the pressure.

Arnett's Kevin 'Pele' Wilson failed to score from close - shooting powerfully straight at Scott, as the ball ricocheted off the Tivoli custodian and went back into play.

With the loss, Arnett Gardens stayed rooted at the bottom of the 12-team table on 23 points.

Three other teams - Portmore United, Humble Lion and Village United - are also battling, to stay out of the relegation zone. All are on 27 points. Portmore moved out of the relegation zone - on goal difference - as they moved from 11th to nine on 27 points, with a 2-1 win over Boys' Town. Humble Lion and Village United are tied for 11th spot, with the identical 27 points and the same goal difference.

Arnett's coach, Wayne Fairclough, tried to put on a brave face in adversity.

"It was a good game today. We knew we had to win, (but) the gods were against us today. They (Tivoli) scored one but we squadered our chances. It is not over, we have a lot of games left to play. We are playing good we're just not scoring our chances, it is not our luck at this moment," said Fairclough.