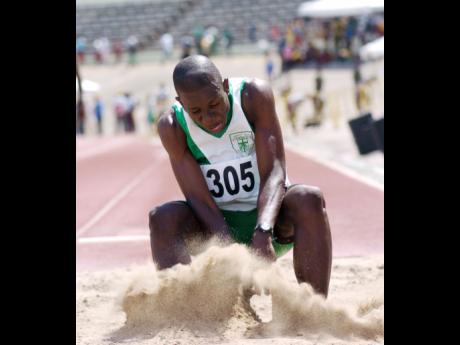 Morant Bay High School's Carlington Benjamin lands in the sandpit on his way to winning the boys' Class One long jump on day one of the JN/JPS Eastern Athletics Championships at the National Stadium yesterday. Benjamin registered the competition's best mark of 6.82 metres to secure the gold medal. - Ricardo Makyn/Staff Photographer

The McKay sisters, Margaret and Tasha, of Oberlin High, were in record-breaking form on yesterday's opening day of the two-day JN/JPS Eastern Athletics Championships.

In the Class Three 1,500m, Margaret stopped the National Stadium clock in five minutes, 05.15 seconds to beat her old mark of 5:05.19, which was established last year.

The day's fourth record was established in the preliminary round of the sprints - the boys' Class Three 100m - in which Morant Bay's Roman Foster (11.68) erased the previous mark of 11.69.

A total of 61 finals will be contested on today's final day, which is set to start at 9 a.m.