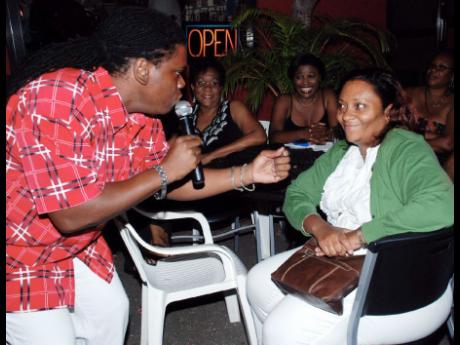 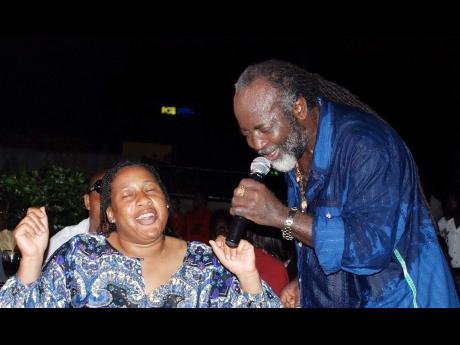 Jackie Williams (left) seems to be in a trance as Freddie McGregor belts out one of his hits at the Studio 38 concert series on Sunday at Pulse headquarters in New Kingston. - Colin Hamilton/Freelance Photographer
1
2

THE THIRD instalment in the fortnightly Studio 38 concert series fell on Valentine's Sunday and the music, live and recorded, duly acknowledged the day for lovers with a generous serving designed for matters of the heart. Still, this is Jamaica, the home of rockers, and in a solid one-hour performance, plus a few minutes encore (which he ended going way back to Bobby Babylon) Freddie McGregor duly delivered the staple of the Jamaican music diet to a delighted audience.

Notable exceptions were the slow jam,
So I'll Wait For You
and the superb surprise of the night,
Lord Help Me Jesus
.

However, the happy coincidence of the special day and the series at Pulse headquarters, Trafalgar Road, New Kingston, may have had its downside as that audience, though substantial, was noticeably smaller than the previous staging with Ken Boothe. And there was a repeat of an unhappy moment for, just as at the Ken Boothe show, there were impatient handclaps for the night's main performer after Lloyd Parkes and We The People band had completed its stint and the break went on far too long for the audience's liking.

But when McGregor was introduced and walked from backstage asking in song that the band "slow it down" as he has one thing he would like to say, frustration turned to delight and, from start to finish, McGregor kept his audience happy.

He adjusted the format of presentation from his extensive catalogue to create the desired effect at various points in the concert. From the outset, McGregor delivered in party style, with Lloyd Parkes and We The People transitioning seamlessly between songs. So, the opening
I See It In You
segued into
If You Wanna Go
, closing the latter singing to the drummer's light touch on the hi-hat and accompanied by the official onstage harmony duo and the unofficial chorale of the audience.

McGregor paused to greet all and promised those seated "we going to get up out of the chair and nice up the place", then the delightful stringing together of rockers continued with
Africa, To Be Poor is a Crime
(the first 'pull up' of the night as the audience hollered its collective joy) and
Prophecy
. McGregor has a strong stage presence and on Sunday night he utilised the performance area efficiently without being constantly in motion.

There were cheers for the distinctive synthesiser introduction of
Push Come to Shove
, the song fulfilling its reception, and the band and singer rolled into
Stop Loving You
. On his signature,
Big Ship Sailing on the Ocean
, McGregor engaged the willing audience, urging the additional voices on with "you start to sound like Kingsley Cooper mass choir" and "you start to sound like Anita Baker" as they sang the refrain repeatedly.

Although there were those who took in the entire concert from their seats, by now McGregor had long accomplished his intention to 'nice up the place'. Still, he took it up a notch with songs from his Studio One era,
Let Him Try
,
Loving Pauper
and
Winner
tugging some more people from their seats and sending those already standing into even more energetic dancing.

McGregor gave an excellent nod to Valentine's Day with a verse and the chorus of Brandy to the keyboards only, following with an extended version with his
I'll Wait For You
.
Lord Help Me Jesus
was totally unexpected (McGregor said "the book tell us when we enjoying ourselves we must take time to give thanks") and packed a spiritual wallop, the dancing slowing to a praise and worship sway, hands waving church style as McGregor closed his eyes, sang and raised his right hand to the heavens.

McGregor surged to the close with a three song tribute to Dennis Brown,
Here I Come
, segueing into
Revolution
, the audience's collective whoop resulting in McGregor's command to "pull it!". He said he could not leave the stage without doing his favourite D Brown and
Love Has Found Its Way
proved suitable for the night. There was an additional song from the Crown Prince's catalogue, McGregor ending a part of
Silhouette
by singing "that was your request".

"As you call it, me sing it, like how selector walk with pouch," he commented.

McGregor closed on a high with a pair from his arsenal,
Love Fever
and
Don't Hurt My Feelings
, but a recall to the stage was always on the cards. He supplied
Just Don't Wanna Be Lonely
and went way back with
Bobby Babylon
before singing his farewell once again.

Before the break, which went on too long, Clancy Eccles Jr and Lloyd Parkes alternated songs, the former's take on
I Wanna Love You
hitting the spot. And the wait for McGregor was made easier with love songs, including
Love TKO
and
Let's Get It On
, Shaggy's
Boombastic
a rare, and appreciated, dip into the more uptempo side of things.