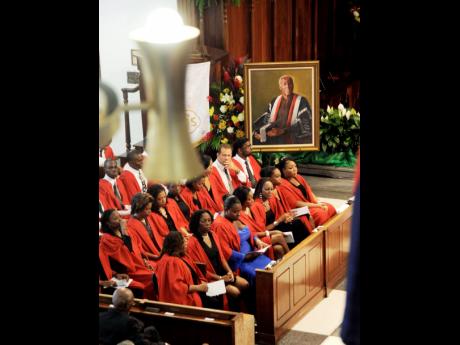 A portrait of Professor Rex Nettleford hangs beside the combined choirs of the University Singers, the University Chorale and the National Dance Theatre Company at the University Chapel in Mona, St Andrew, yesterday, during the thanksgiving service for the late cultural icon. - Ricardo Makyn/Staff Photographer

An eclectic band of mourners gathered at the University Chapel in Mona, St Andrew, yesterday to celebrate the legendary feats and remember the compassion of cultural giant Professor Ralston Milton 'Rex' Nettleford.

Among those in attendance at the official service of thanksgiving for the intellectual icon were politicians, diplomats, maintenance workers, students, professors, and dancers.

Those in mourning reflected the people Nettleford's life touched, and are perhaps best encapsulated in a phrase used by Professor Edward Baugh - "every puss, dog and fowl".

The select few who spoke during the funeral recalled Nettleford's bountiful contribution to the Jamaican society a lifetime of work which they said bore the fruits of educational institutes, a dance company, academic treasures and an unmistakable Caribbean identity.

Prime Minister Bruce Golding called Nettleford's death an immense loss, but said the institutions he created would carry on his work.

Golding said Nettleford in his lifetime assisted in certifying the Caribbean identity, helping to correct along the way many misconceptions planted in the psyche of the masses.

"There was Rex Nettleford, that superb mind, that restless intellect that felt himself called to validate our identity; for many of us had doubts about that identity," Golding said. "Too many of us looked in the mirror and didn't like what we saw and tried every conceivable means of changing it. Rex Nettleford helped to clean that mirror."

Opposition Leader Portia Simpson Miller told the gathering that her memory of Nettleford was a collage of "animated snapshots". Simpson Miller's renaissance man-like description of Nettleford did not fit him in a box. Instead, to her, he was a human being, trade unionist, dancer and a wise man.

Marlon Simms, dance captain of the National Dance Theatre Company, painted Nettleford as a caring "father and brother" despite the high positions he held. Simms recounted the personal handwritten letters of appreciation he and his dance colleagues received at the end of each season.

Nettleford's appreciation for them was returned in spades during the service, after which the urn containing his ashes was taken through a guard of honour to the university registrar's office for safekeeping. A private ceremony will be held on Thursday in the University Chapel gardens.

Nettleford died in a Washington, DC, hospital on February 2, hours before his 77th birthday and days after he suffered a heart attack while on a visit to the United States.