'Much that can never die' 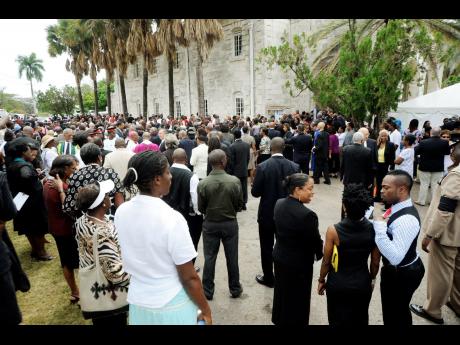 Mourners gather outside the University Chapel after the official funeral. - photos by Ricardo Makyn/Staff Photographer 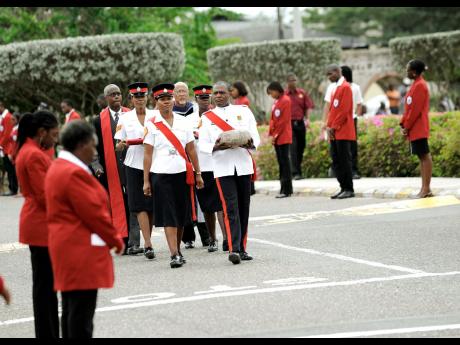 Sergeant Basil Walters of the Jamaica Constabulary Force's Mobile Reserve leads a procession taking Nettleford's ashes through a guard of honour to the office of the University Registrar for safekeeping after the thanksgiving service. 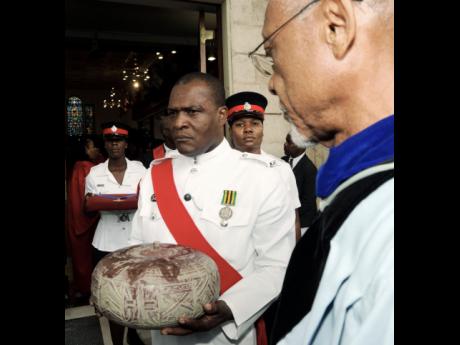 Sergeant Basil Walters of the Jamaica Constabulary Force's Mobile Reserve leads the bearer party during the recession of the urn containing the remains of Professor Rex Nettleford. Looking on in foreground is Professor Barry Chevannes.
1
2
3

Funerals and memorials, recognising lives that were lived, usually leave marks of sadness, whether tracks of running mascara or creases where frowns were.

However, the thanksgiving service honouring Professor Rex Nettleford's life had persons humming the tunes of hymns that were sung with tender expressions on their faces.

Doris Davies worked with 'Prof' for more than 25 years at the Trade Union Education Institute. She wore a colourful suit, standing out against the mass of black, with varying shades of purple. Davies said Nettleford gave her the fabric for her outfit, as well as a cream and brown necklace.

"That is why I wear it today," she said with a firm grip on tissue. "I couldn't miss this for anything."

Three tents were erected on the chapel lawn to accommodate approximately 1,000 people. When it was time for the recession, there were close to 2,000 people there. Many lined up and watched as the urn containing Nettleford's ashes was taken by.

Opposition Leader Portia Simpson Miller said the professor was an example to all boys and girls, reminding them that their dreams were achievable.

Mourners who were drying their tears muttered, "mhmm" and a woman clutched her chest, her eyes squeezed shut.

"There is much about the life of the Honourable Rex Nettleford that can never die," Prime Minister Bruce Golding said in his tribute. "The bridges he has built have enabled our minds to travel beyond their self-imposed boundaries."

Constable Vernal Young of the Island Special Constabulary Force stood outside the main doors in his crisp uniform, watching and waiting for the recession.

"[Nettleford] inspired me," the constable said in a low voice. "This funeral has shown a great amount of principle and discipline."

Clouds repeatedly threatened to burst open but nothing more than a few drops fell. Eventually, the sun came out, shining brightly. The notes of hymns echoed from the chapel walls and many stood outside, silent and listening.

"Tonight the music of hallelujahs will lift with the gentle breeze blowing across the cane piece as it rises to Bunkers Hill, to Accompong, to Blue Mountain Peak, and spreads over the Caribbean Sea," Edward Baugh, professor emeritus, said in his eulogy.

"And as the spirits dance on the waves, we will hear under the singing, the drums," he continued, "The drums - the heartbeat of the people. Good night, sweet prince, and flights of angels sing thee to thy rest."