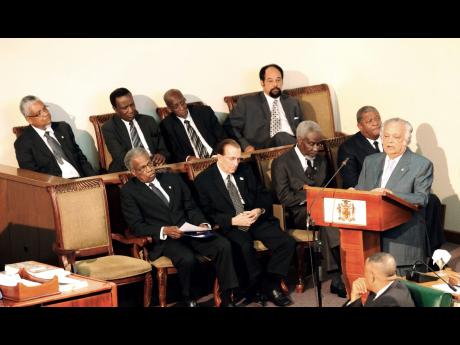 Such was Rex Nettleford's reach across the region and the rest of the world that Gordon House opened up its corridors yesterday to embrace others from the wider Caribbean community - a historic rarity.

As the visitors, some of whom graced the chamber not so long ago, sat in a special area designated for them, Speaker of the House Delroy Chuck acknowledged the presence of "some very distinguished guests".

Debate on the motion to pay tribute to Nettleford was piloted by Leader of Government Business in the House Andrew Holness, the current education minister, who retraced his days as a teacher.

Moments after the Standing Orders were suspended to facilitate tributes by non-members, Sir Shridath declared: "An incandescent eagle was the epithet I borrowed hours after his death. I borrowed it from him."

Throughout his presentation, Sir Shridath described Nettleford as the incandescent eagle.

In the end, he declared that the incandescent eagle still soars in the heart of all the peoples of the region.

He spoke of Nettleford's tenacity of purpose and a spirit that was shrouded in his quiet demeanour.

"He had the capacity to be of service without being servile, and a burning, almost consuming, passion for the UWI as a regional institution," asserted Sir George.

Seaga described Nettleford as a great Jamaican and a great friend. "Rex Nettlefold was proud of his roots as he emerged from nowhere to somewhere, from nobody to smaddy (somebody)."

Patterson stepped up to the lectern with the opening line: "The dreamer has made his exit but the dream must never die."

He described Nettleford as an uncompromising patriot whose remarkable life characterised the quality of his exemplary contribution to the country, region and the world.

"Rex Nettleford belongs not only among the pantheons of national heroes in Jamaica but among the heroes of the Caribbean and should be so regarded," asserted Antigua's prime minister.

He said Nettleford could be considered to be political, yet he transcended politics.

Phillips asserted that Nettleford made black people comfortable in their own skin and was optimistic in his belief in the creative powers of his people.

Government member Pearnel Charles described Nettleford as a social engineer who dedicated his life to the advancement of the people of the region.

Charles said Nettleford's life linked the past and the present but firmly fixed on the future.

Opposition member Dr Donald Rhodd colourfully recollected his days as a student at UWI and how the late professor kept him and his peers spellbound.

As Charles did before her, Government member Olivia Grange described Nettleford as one of Jamaica's cultural icons.