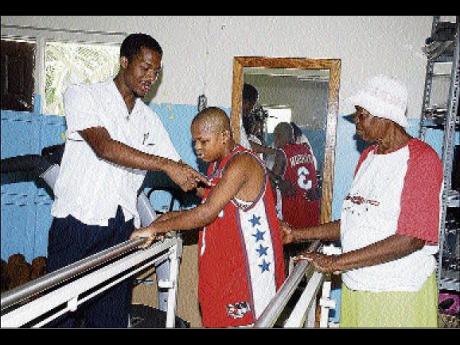 Resource woes are severely hindering the scope and service of the Sir John Golding Rehabilitation Centre in Papine, St Andrew, consequently delaying the healing process for many patients.

Persons in need of therapy are often referred by the island's hospitals to the centre, but space limitations are having a debilitating effect.

"The institution was built more than 50 years ago and it hasn't been expanded. We actually need an institution like this in every county, because the needs are islandwide," Dr Rory Dixon, senior medical officer at the centre, told journalists during a guided media tour of the facility last week.

He added, "We are physically unable to take on all of that with the present facility."

A total of 60 persons, including 30 children, are currently undergoing treatment at the facility, but Dixon disclosed that there were approximately 30 persons on a waiting list.

A shortage of equipment is also handicapping the institution.

Physiotherapist Suzanne Harris-Henry said such deficiencies were dire, as patients were deprived of treatment that fast-track rehabilitation.

Some of the equipment the physiotherapy department needs are standing frames, tilt tables and whirlpool baths for children.

"They (children) are not getting the water therapy, which would be more beneficial," she said.

"They probably could achieve much more in water before achieving it on land, and that is limited at this time."

Also among the pressing needs of the Government-funded institution are customised transport to get students to and from school, a revival of its swimming programme and adequate staffing.

Despite the critical shortages, the institution remains a source of hope.

Shushanna Thomas, who suffered injury to her neck last July in an automobile crash, resulting in paraplegia, is one such patient.

She said, at first, she had little hope of recuperating. But those fears are fast dissipating for the 20-year-old, who aspires to pursue a career in law or journalism.

Thomas has made major improvements over her four months of admission, regaining the use of her hands.

"I was told that I wouldn't be able to move again, but I am now able to move my hands and I have feelings in my legs, so I know that one day I will be better," she said.