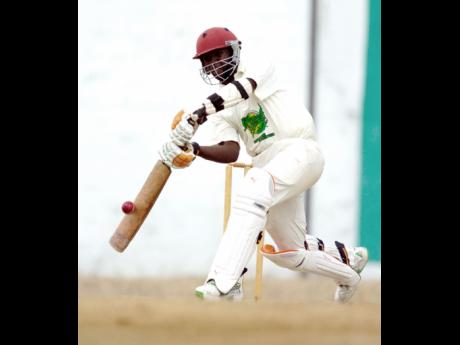 Former national youth standout, John Ross Campbell, is anxious to put his best foot forward, after being named as a replacement for an injured Shawn Findlay ahead of Jamaica's West Indies Cricket Board (WICB) Regional first-class championship top-of-the-table clash against Barbados on Friday.

Campbell, who has represented the country at both the Under-15 and Under-19 levels, has been one of the most promising youth in recent years and has had several outstanding performances at local cricket club Melbourne.

"I am really looking forward to it, I have always looked forward to representing my country. Now, if I am selected to play, I simply have to make the best of the opportunity," the attacking right-handed batsman told
The Gleaner
.

"There is always going to be some nerves, it's a big opportunity but I will be looking to get over that, go out there and give it my best shot."

Campbell was an outstanding performer at the national one-day trials in October of last year and despite not being as impressive in the four-day trials, which took place a month later, the player does not feel he will be out of his depth.

"It is a big step up, but I was coping well with the players at national trials and should I get the opportunity I should be able to (cope)."

Campbell is expected to leave the island today to join the team in St Augustine ahead of Friday's clash.

Eyeing a third consecutive title, Jamaica currently top the standings with 48 points, with a game in hand.

Second-place Barbados are on 45 and could take over the lead with a win.