Skittle Queen to nab The Chief 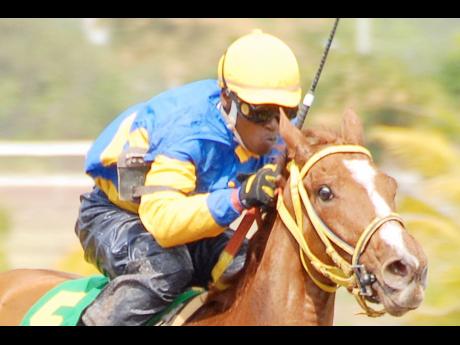 IT'S holiday racing at Caymanas Park today, the 10-race programme featuring the Ash Wednesday Trophy over 1300 metres to be contested by eight starters.

Champion trainer, Wayne DaCosta, and his stable jockey, Omar Walker, should team up to win with the consistent American 4-y-o filly SKITTLE QUEEN, who reports well prepared in a bid for this trophy.

When both horses last met over the round five course on October 28, then favourite, THE CHIEF, won by 2-1/2 lengths from DIABLOICAL KID in the smart time of 59.3, as SKITTLE QUEEN made late headway to finish 3-1/4L third.

Since then, THE CHIEF has failed to follow up in three races, best of which was his close second over 1200 metres to COLEMAN'S ROCK as the 1-2 favourite on January 2.

He was deemed lame for his intended race on February 3, but reports in good condition today and is poised to fight out the finish from the convenient mark of 52.0kg.

Still, preference is for SKITTLE QUEEN, who not only renews rivalry with THE CHIEF over a more suitable trip, but has trained well in preparation for the race.

The bay filly by City Slew out of Sunbeam Music lost few marks in defeat as the odds-on favourite on January 16, when beaten two lengths by back-to-form HAIL THE GENIUS over 1400 metres.

However, a fortnight earlier, she held off lesser fancied stable companion NEW KINGSTON by a half-length over 1200 metres, covering the distance in the fairly good time of 1:12.3.

The fact that SKITTLE QUEEN is more extensively prepared than THE CHIEF gives her the edge in my book.

She is also nicely drawn on the outside of the field and, given this extended trip, should turn the tables on THE CHIEF, and beat the others as well.

Elsewhere on the programme, the unbeaten SPORTS STAR should start his three-year-old campaign on a winning note when he takes on five opponents in the opening race over 1300 metres for native and imported three-year-olds.

Trained by Anthony Nunes, SPORTS STAR won both races as a two-year-old last year in decisive fashion, looking every inch a class act before he was affected by sore shins. As a result, he missed the big Supreme Ventures 2-y-o races in the last quarter, but returns well trained and will not be easily denied.

SPORTS STAR (Shane Ellis up) should have little difficulty in putting away MY BREDREN, who was a winner over 1200 metres on January 23.

Other firm fancies on the card are BROTHERLY LOVE in the third; BURST OF ENERGY in the fourth; REAL MINISTER in the fifth; and GO MY ROBIN to repeat in the seventh.