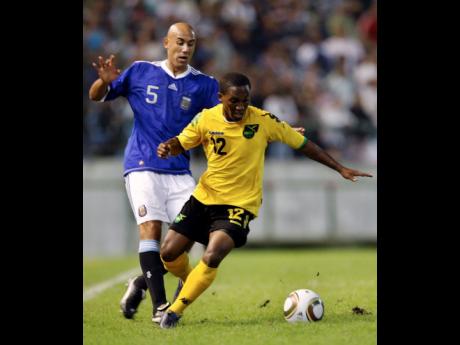 KEAMMAR DALEY got his birthday present a week early this year: seeing Diego Maradona in the flesh.

Daley, who turns 21 today, was a member of the Jamaica senior national football team which tackled Argentina in a friendly international in Mar del Plata last week Wednesday.

The midfielder, stockily-built like the Argentine great, played the majority of the game that the Reggae Boyz lost 2-1, after leading up to the 86th minute.

"It's a good achievement for most of us as local players," said Daley, who represents defending champions Tivoli Gardens in the local Digicel Premier League.

"For me personally it's a huge experience, one step further in my career.

"We played in Argentina against them, which is not something that happens on a regular basis and Diego Maradona, one of my favourite players, was right there.

"He was one of the greatest players ever. It was a good birthday gift, even though it's still a few days away and I didn't get to touch him or get an autograph, but seeing him was enough," admitted Daley in an interview the day after the match, when the Reggae Boyz had started their travels back home - heading from Mar del Plata to Buenos Aires.

The former Jamaica College Manning Cup star said after watching tapes of Maradona, he became a huge fan of the Argentine, who captained his country to the World Cup title in 1986 with a victory over Germany; before losing the next final in 1990 to the same country.

"I've always watched his tapes and it inspired me to score goals, to be a leader because he was a leader and to do special things at special moments," admitted Daley, a skilful midfielder who has not only been noted for setting up goals, but scoring as well.

"My former coach, the late David 'Wagga' Hunt, introduced me to him because he's an Argentina fan. He (Hunt) gave me a couple of tapes and I watched them, so he inspired me a lot. I know that if he had been alive he would have been here.

"The day the game was played was also his (Hunt) daughter's birthday, so there's a whole lot of special moments," added Daley of his birthday present that came a week early this year, in Argentina.