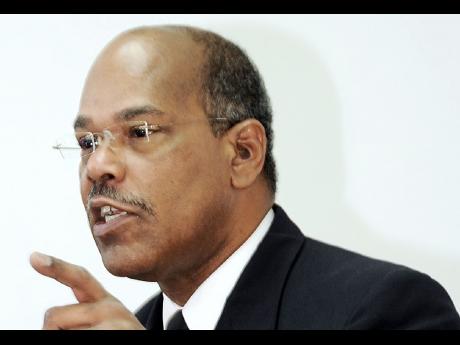 During a press conference on Monday to outline the Jamaica Airline Pilots Association's (JALPA) drive to purchase Air Jamaica, its combative spokesman, Russell Capleton, addressed a roomful of vocal supporters.

It was the latest public engagement for the 56-year-old Capleton, and his colleagues, since they formally announced their intention to buy the troubled airline last October.

Their bid took a hit last week from Finance Minister Audley Shaw, who said the JALPA bid was made too late and would not be considered by Government.

Shaw added that only a breakdown in talks with prospective buyers, Caribbean Airlines of Trinidad and Tobago, would open the door for the pilots.

On Monday, Capleton was still optimistic his organisation would take control of Air Jamaica.

"If I were a gambling man, I would say our chances of winning are 65 per cent, but it fluctuates. Some days it's at 70 per cent," Capleton told
The Gleaner
. "But I still fancy our chances."

Last month, there were contrasting statements from Shaw and Air Jamaica divestment Chairman Dennis Lalor on the state of negotiations with Caribbean Airlines.

At the Mayberry Investors' Forum on January 23, Shaw said Caribbean Airlines would disclose its terms for taking over Air Jamaica within one week. When those details did not materialise, Lalor said the airline would be out of Government's hands by the end of March.

The uncertainty has given Capleton and his colleagues a window of hope.

"Based on the utterances by the Government, it's not over, as far as we are concerned," he said. Capleton admits the wait has made at least one of the JALPA's major investors wary.

"They are still a bit sceptical," he said.

Who are the backers?

The JALPA has declined to reveal the identities of their backers, saying only that they are foreigners prepared to put up the US$60-million equity required to purchase Air Jamaica. The pilots came into the picture when Indigo Partners of the United States dropped out of the bidding race.

The JALPA drive has sparked an unofficial 'Keep Air Jamaica Jamaican' campaign. It has the support of staff from all departments at Air Jamaica as well as the National Workers Union (NWU), which represents close to 1,000 of the airline's 1,900 workers.

NWU President Vincent Morrison has questioned Caribbean Airlines' credibility. He says it lacks the capacity to sustain Jamaica's tourism sector or farm work programmes in the United States and Canada.

But there are also JALPA critics, including Godfrey Dyer, former president of the Jamaica Hotel and Tourist Association. He believes the Government should not sell Air Jamaica based solely on nationalism.

"It's sentiment that got Air Jamaica where it is now," Dyer said.

Government had set a March 2009 deadline to divest Air Jamaica, which it says has an accumulated debt of US$1.3 billion. Three years ago, it sold its unprofitable Kingston-to-London route to Virgin Atlantic, which was followed last February by the cutting of the Atlanta, Miami, Los Angeles and Grand Cayman routes.

Air Jamaica's offices in those locations were also closed.

Though he has been a licensed commercial pilot with Air Jamaica for 30 years, Capleton is accustomed to bouncing figures. He was born and raised in Falmouth, Trelawny, by parents who were accountants, but attended Jamaica College in Kingston and New York University in the United States, where he studied advertising and commercial arts.

He was an account executive at the McGann/Erickson advertising company before deciding to make a career switch, in the late 1970s. He received his pilot's licence just over one year of starting flying lessons with Wings Jamaica at the Tinson Pen Aerodrome, and made his debut flight with Air Jamaica in January 1980.

Capleton has witnessed years of turbulence at the airline, but says there was a time when things were going well.

"I believe the (Gordon 'Butch') Stewart period was good because it brought the airline back on time and there was a good feeling among staff," he said. "It was bad the way it ended."

Stewart is the hotelier whose Air Jamaica Acquisition Group operated Air Jamaica for 10 years. It was operating at a loss when Government resumed control in late 2004.

Capleton says JALPA's members plan to form their own airline if their Air Jamaica bid fails. If that does not work out, he says many of his colleagues would be forced to look overseas for work.

"The pay would be twice as much as here, but it would be unfortunate because home is where we all want to be," he said.