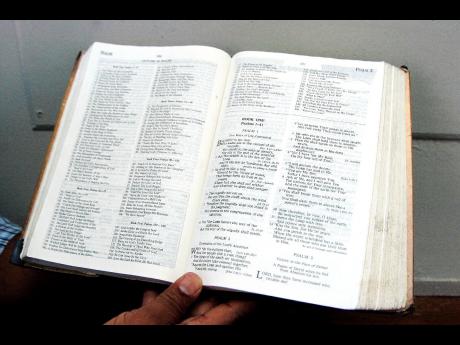 I AM constrained to respond to Mark Wignall's article titled 'In the beginning, man created God,' which was published in another newspaper in January. My compulsion intensified after I watched and listened keenly to Mark Wignall on Television Jamaica's 'Religious Hard Talk' as he attempted to articulate his atheistic philosophy. The programme is hosted by Ian Boyne.

I have concluded that Mark Wignall is a closet religionist and an almost-Christian searching for answers to life's most mysterious and troubling questions.

As I watched and listened to Mr Wignall and Lloyd D. Aguilar release their baseless anti-God and anti-Christianity diatribe and as I imbibed Mr Boyne's poignant questions and significant rebuttals, I shook my head in disappointment. I was disappointed because Mark Wignall the television guest was far less impressive than Mark Wignall the columnist.

Wignall's fundamental atheistic position is that man created God in an attempt to deal with his existential anxiety about death and non-being. He claims that the idea of God eases humanity's despair in the face of eternal expiration and total annihilation and the meaninglessness that such reality brings.

Be that as it may, Wignall has to account for the origin of the idea of God. The statement "God does not exist" assumes that at least the idea of God exists. From where has this idea emanated? If indeed we are finite and imperfect, how could we perceive of and apprehend the infinite and the perfect without an infinite and perfect being impressing such perceptions on our minds? We have not got adequate responses to these questions from these so-called atheists.

To exist in this world and universe is to be subjected to the limitations of life and to the threat of non-being or death. This cannot be said about God. His existence is of a different quality or kind; He is not subjected to the limitations of human life. This is what many atheists fail to realise. Yet, despite God's 'otherness', He has deigned Himself to not just create but love and sustain humanity. His allowing evil and suffering to suffuse the world does not negate his existence or his involvement in human affairs.

The reality is that people like Mark Wignall are disappointed with God because He is not 'created' in their own image. They are intolerant of God because He refuses to operate in line with their philosophical musings and their narcissistic expectations. When they are searching for answers to life's tragedies and mysteries, they clutch at straws and fall back on that age-old tactic of rejecting the Christian God or any god at all.

They fail to get God to bow to their agendas and to be amenable to their whims and fancies, hence they snub Him.

At the end of the day, it seems some men did create a god in their own image, but it was another god called 'atheism'.

Feedback may be sent to columns@gleanerjm.com, or earlmontwilliams@gmail.com