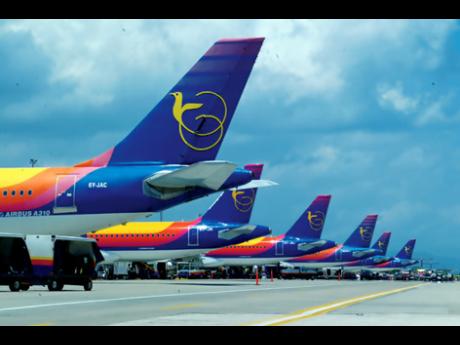 THE JAMAICAN Airline Pilots' Association's (JALPA) bid to take over Air Jamaica continues to experience difficulties and is heading for an almost certain collapse.

A day after Contractor General Greg Christie told JALPA that it would be illegal for Government to bend the rules and negotiate with them, Prime Minister Bruce Golding said yesterday that the proposal from the pilots was fundamentally flawed.

"JALPA has not, up to now, presented any credible evidence of its ability to secure the financing required to operate the airline, which it estimates to be US$100 million," a statement from Jamaica House said of the proposal submitted by the pilots.

The statement from the Office of the Prime Minister reiterated that the estimated cost of redundancy payments to workers is US$27 million, not US$47 million, as assumed by the pilots.

JALPA's bid proposal states that US$40 million of the US$100 million that it would use to keep Air Jamaica flying would come from redundancy payments to which the workers would be entitled.

Jamaica House also stated that JALPA had submitted the names of two overseas private-equity firms that it claims have offered to source the remaining US$60 million.

In ripping through JALPA's proposal, Golding said the organisation "admits that these private-equity firms have not yet reviewed its (JALPA's) business plan".

However, Granville Valentine, vice-president of the National Workers' Union, said the prime minister's statement would not stop the workers from seeking to take over the national carrier.

"In coming days, we will continue to press along and ask the contractor general and continue to ask the Jamaican people to come out and strongly lobby and convince the prime minister not to give away our airline to Trinidad," Valentine told
The Gleaner
yesterday.

However, Golding has said that the insistence on retaining the airline in Jamaican ownership, "desirable and patriotic though that might be", can only take place on the back of a viable plan.

The prime minister has noted that JALPA's business plan states that it will have a "lean but focused workforce", which would make its operation unsustainable.

"There are other operating forecasts in JALPA's business plan, including passenger loads, unit costs and revenues that are overly optimistic, given the current realities of the airline industry and the intensity of competition from low-cost carriers operating under the Open Skies Agreement. These forecasts would most certainly be revised once the lender or investor conducts the required due diligence, and this will impact significantly and negatively on the viability and sustainability of its proposal," said Golding.

JALPA had written to the contractor general, arguing that the workers had a right to be considered for the purchase of the airline.

Christie said in his response, however, that, should the Government choose to facilitate the singular desires of JALPA and/or the employees of Air Jamaica, or any other entity or special-interest group, his office would view that move as a fundamental violation of the government contract-award principles.