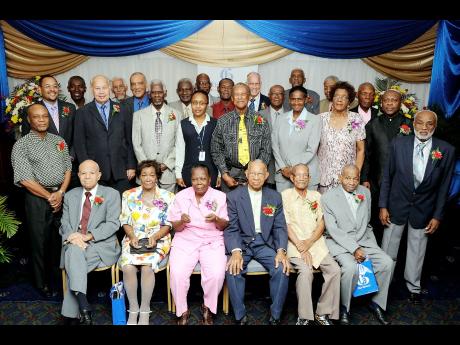 Oliver Clarke (second left, second row), The Gleaner's chairman and managing director, and Christopher Barnes (left, third row), deputy managing director, pose with Gleaner pensioners who were honoured by the newspaper at a special luncheon on Tuesday at The Jamaica Pegasus hotel in New Kingston. Also in photograph is Shaekera Lennon (fourth left, second row), one of the newspaper's outstanding performers for 2009. - Rudolph Brown/Photographer

The Gleaner's Deputy Managing Director Christopher Barnes has lauded several of the newspaper's pensioners for their outstanding contribution to the company over the years.

"The pensioners who are here didn't (just) work here, they really lived
The Gleaner
and they want to make sure that
The Gleaner
is in good hands," he said during the pensioners' annual luncheon at The Jamaica Pegasus hotel in New Kingston on Tuesday.

In giving the group an overview of the newspaper, Barnes said the company has seen much improve-ment since 2008, which was a challenging year for revenue.

He shared some of the major successes of the company, such as the editorial coverage of the top stories in the island, creditable performance by the advertising department and online developments.

"We are merely custodians of this amazing company, and one day we hope to be in the seats that you currently occupy, celebrating the continued excellence of this great Jamaican company," he told the pensioners.

Barnes added that the occasion gave
The Gleaner
the oppor-tunity to connect with its past and to demonstrate its appreciation, year after year, to the persons who set the pace for a successful company.

"I am very proud that you have worked at
The Gleaner
and have helped it to be where it is now," said Oliver Clarke, the company's chairman and managing director, as he welcomed the group to the function.

Twenty-five former
Gleaner
workers turned out to catch up on old times with their colleagues and learn about the changes that are taking place at the North Street-based headquarters of the newspaper.