Hodges off to MLS 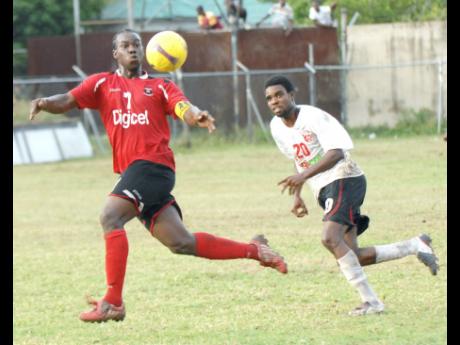 Devon Hodges in action for Rivoli.

National striker Devon Hodges is on the verge of signing a long-term contract with US Major League Soccer (MLS) outfit Colorado Rapids after leaving the island yesterday to join up with the team's officials.

The bulky forward will tour the team's facilities and get acquainted with the staff over the next two days before joining up with the rest of the team in Arizona, where a pre-season camp is being staged.

Officials close to the deal confirmed that the club has made an offer for the player and that discussions are ongoing as it relates to personal terms and a transfer fee. Everything is expected to be finalised within days as the Rivoli hitman gets set to join fellow Reggae Boy Omar Cummings at the club.

Hodges, who made his debut for Jamaica in a May 2009 friendly match against El Salvador and scored his first international goal in his second match against Panama, was elated with the development.

"I am elated about this. I have been working on this for a long time so Im determined to just continue keeping the focus. I have waited for the right time and I believe that now is the right time. I just have to do this to make all my family and supporters proud," Hodges said, shortly before boarding his flight to Colorado.

A technical team from the Rapids was in Jamaica before the Reggae Boyz recent friendly international against Canada to have a closer look at the striker, and were left impressed with his showing at training sessions and the actual game.

The 25-year-old is determined to make his mark at the club and remove any doubts about nervousness ahead of his trip. He also took time out to mention the input of Cummings in his development and growth in the national programme.

"I am not nervous, I believe that I have had enough international experience under my belt, so I just have to go there and do my thing," said Hodges. "Omar Cummings is a good friend of mine. We reason a lot whenever we get a chance to and he has been very supportive of me, especially when we are on the national camp. He shows me the guidelines and so forth, and gives me a lot of tips to improve my game."

Hodges who started his career at Wadadah before his move to Rivoli, ended last season as the league's top scorer with 24 goals and still holds the record for most goals in a single game after he bagged 10 goals during Rivoli's 15-0 win over Invaders in the 2004-2005 season.

Rivoli's vice-president Ansel Smart confirmed the offer and explained that it was the club's goal to produce players fit for the international market.

We are in discussions with the club and we hope to have an agreement very soon," Smart stated. "It is something that we want as a club - to develop players for international level. That is one of the mission of the club."