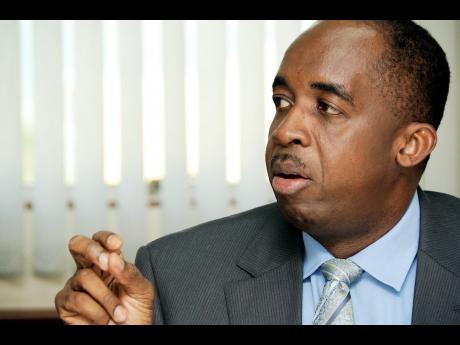 
Patrick Hylton,
the career banker who has presided over five straight years of profit growth at National Commercial Bank (NCB), is not about to apologise for the strong profits the Michael Lee Chin-controlled bank continues to post, reaching $10.24 billion last year. Nor is the man who sat as managing director of the Financial Sector Adjustment Company (FINSAC), the government bail-out vehicle for insolvent banks in the financial-sector meltdown of the 1990s, shamed by the entity's rescue role, which is now being vilified.

"There is talk about super profits in this environment, but NCB's profit is made on a huge balance sheet," Hylton told the
Financial Gleaner
during a recent interview.

"When you look on the return on assets, it is not disproportionate. We have over $300 billion in assets and we make $10.2 billion. It might sound like lot of money, but as a percentage of the size of the business, it is not exorbitant."

Stressing that the context in which the strong profits were being chalked up in the midst of the global recession with telling local manifes-tation must be understood, the man who took over the helm of the bank in December 2004, after a short stint as deputy managing director, noted that NCB was not alone in recording a continuous profit spurt.

Rival Bank of Nova Scotia has consistently outpaced NCB in profits and deposits despite the latter's dominance in assets and branch network.

He credits the NCB Group's continued strong performance in this period on skilful management of the of the liability side of the business, compressing costs and holding on to cash rather than going on an expansion spending spree. Further belt tightening affecting all areas of the group has not been ruled out.

And while keeping close to his chest details of the level of interest income the group will have to forego as a result of the government-imposed debt swap, Hylton is already looking ahead to the opportunities for greater loan business from a renewed appetite for borrowing that a lower interest-rate regime will open up.

"We think that a low-interest rate environment is good for banksto make money," he declares unabashed.

"We expect that the economy will pick up and people will want to borrow more."

The NCB Group has offered up J$80 billion and US$98 million, or 28 per cent of its assets, for lowerrates under the government-debt programme.

The Clarendon College, Glenmuir High School and College of Arts, Science and Technology (now University of Tech-nology) graduate, whose first career ambition was to become a pilot, has shrugged off modest declines in financial performance for the quarter ended December last year as not being reflective of fundamental slowdown in NCB's profit-ability. Hylton says, like an athlete, the last performance is behind him and he is already focused on registering stronger growth in all banking segments for the three months under way, as well as the current year.

A trained manager, Hylton, with several years of banking experience under his belt, joined up with FINSAC soon after its creation in 1997 under the leadership of former central banker and World Bank economist, Dr Gladstone Bonnick, to resolve the financial-sector problems. Earlier experiences at Scotiabank and five years at Citizens Bank plus a one or two-week stint at the Blaise Trust and Merchant Bank - one of the first institutions to go under - equipped Hylton for the FINSAC challenge, he said.

He recalls that after discovering immediately on appointment as its general manager that Blaise was insolvent, he reported the fact to the banking authorities and resigned but was called back by the Government to help resolve the problem as part of the Financial Institutions Services Limited (FIS), the forerunner to FINSAC.

"People forget that FINSAC did not cause the problem," Hylton said of the current stigma associated with the name of the organisation.

Hylton, through his lawyers, has

raised issues about the objectivity of the ongoing commission of enquiry into the 1990s banking collapse and the role of FINSAC.

He is party to a suit which has been filed in the Supreme Court which has secured an injunction to bar Justice Boyd Carey and other members of the FINSAC commission of enquiry from proceeding with the hearings.

"I think an enquiry into the role of FINSAC can be a very useful thing. But I think it is also very important that the enquiry is also fair and seen to be fair," Hylton told the
Financial Gleaner
.

"There must be no doubt in people's mind that everything about it is objective because it is an impor-tant issue."

He maintained his willingnessto testify before an impartial commission.

And what of the salient lessons from the financial-sector collapse of the '90s. "People who are running a business need to understand the business properly," Hylton suggested.

He has absolved himself of any blame in respect of Citizens Bank and Blaise, which he led before their ultimate collapse. Having in effect blown the whistle on Blaise, Hylton said while he led FINSAC he did see many of the loans he granted at Citizens Bank on the list of bad loans that ended up on his new desk.

On his transition to NCB, Hylton noted that by 2003, FINSAC had wound down to the point where he needed a new challenge.

"I didn't think it required some-body at my level to continue managing the operations."

From a flurry of job offers in Jamaica, the Caribbean, Europe, the United States, South America, Africa and opportunities to pursue higher education, he succumbed to the persistence of the NCB head hunters.

Believing he initially happened upon banking as a career quite by accident of first responder to his post-college job applications, resolved early in his decision to be the best he can be in his chosen field.

Now his vision for NCB is to take the 172-year-old institution to new heights of service and profitability.

"I want NCB to be recognised in this society as the pre-eminent financial institution and then we also have visions and ambitions for NCB to take on a larger regional presence and, within that context, to perform at a very high level within the Caribbean region."

How long will it take before Patrick Hylton transitions out of NCB?

"As long as I am relevant, as long as I am making a positive con-tribution," and "I have a role in driving the organisation to greater success."