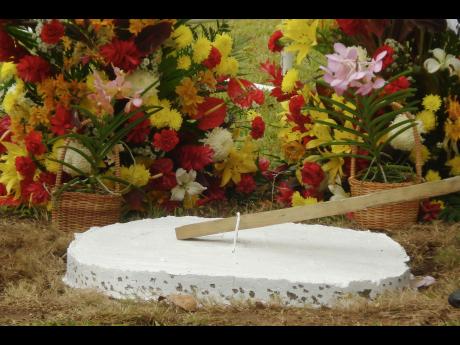 An intimate group of family and close friends gathered yesterday at the private cemetery adjoining the University Chapel at Mona campus for the interment of late Vice-Chancellor Emeritus Professor Rex Nettleford's ashes.

The urn, made by noted ceramist Norma Harrack, was borne to the grave by Nettleford's secretary, Eula Morgan.

The ceremony was private and brief and away from the glare of cameras and formalities that dominated his official funeral at the same venue on Tuesday, February 16. His final resting place, thought fitting by all present, lies between those of two other UWI stalwarts, A.Z. Preston and Sir Philip Sherlock. The latter was Nettleford's mentor.

The ceremony, which lasted just under 15 minutes, was officiated by the Reverend Garth Minott.

Fulfilling the late professor's wishes, the ashes of his mother, Lebertha Palmer, who died four months ago, were interred with his. As the cemetery workers sealed the tiny grave, Nettleford's relatives and extended family of the National Dance Theatre Company (NDTC), UWI colleagues, members of staff, his helper of many years, and other close friends stood by hugging, softly sobbing and simply watching in sombre silence.

One late arrival and close confidante from the Louise Bennett/ Ranny Williams era, Maude Fuller, quipped, "What about the singing; unnu can't send mi friend home without a little singing!"

Carol Reid and Carl Bliss of the NDTC singers took up the challenge and led off with one stanza each of
Mambu Ma
, followed by
Sleep on, Beloved
.

Dr Cezley Sampson, while singling out some special individuals for their contribution to the planning of Nettleford's funeral and other commemorative events, extended gratitude to all and said a foundation would be set up soon in memory of the late vice-chancellor emeritus.