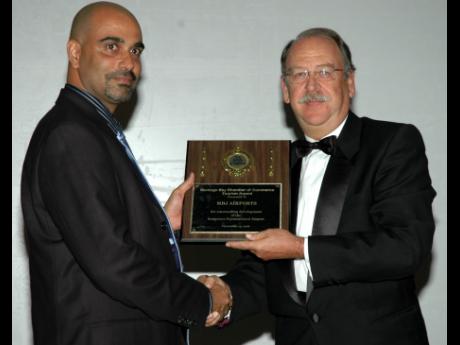 
Tourism stakeholders watched an estimated US$250,000 (J$22,500,000) in revenue sail out of their hands as the captain of Royal Caribbean's
Voyage of the Sea
made a U-turn away from the port in Montego Bay, St James, yesterday.

"The captain decided not to dock because of the weather conditions," John Byles, chairman of the National Cruise Council of Jamaica, confirmed to
The Gleaner
. The ship had on board some 3,000 passengers.

With the average passenger spend estimated at US$92, Byles said this was a major blow to an industry already suffering from a 30 per cent fall-off in business.

"Every single ship that comes in counts at this time because they are so few in number," he argued, adding that the situation was even more devastating owing to the magnitude of the business that the
Voyage of the Sea
brings in.

While the cruise line bade farewell to Jamaica, some 300 Jamaica Union of Travellers Association (JUTA) and Jamaica Co-operative Automotive and Limousine tour operators watched in shock. They had waited since 7 a.m. for the vessel, which was scheduled to dock at 9 a.m.

Dependent on the ship

Secretary of JUTA, Ewan Ward, told
The Gleaner
that many of his organisation's members were dependent on the ship.

According to Ward, owing to the climate of the market, there are taxi operators who actually borrowed money to fill their gas tanks with the hope they would make enough to pay back.

These drivers, craft merchants, attraction operators, duty-free merchants and restaurants all depend on the small number of travellers that the industry now offers to the tourism capital.

"If the ship docked and you spent the day there (at the pier) and didn't make a cent, the opportunity presented itself so the disappointment would not be this bad," said Ward.

Checks made with the Meteoro-logical Service reveal that winds over 27 knots were present in the Montego Bay area sometime after 6:30 yesterday morning, as a result of a stationary front across the Caribbean. The front, which moved to the far east of the island, was dissipating and had weakened considerably late yesterday evening.