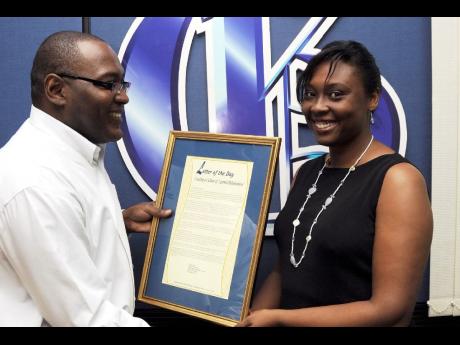 The Gleaner's Editor-in-Chief, Garfield Grandison, presents Sarah Wilks with a framed copy of of her letter to the editor. The Gleaner honoured Wilks for her Letter of the Day, 'Creating a culture of learned helplessness', by also awarding her with the Silver Pen on Thursday at the Gleaner's Kingston offices. - Norman Grindley /Chief Photographer

Sarah Wilks received the Silver Pen award for her letter to the editor entitled 'Creating a Culture of Learned Helplessness'.

Wilks spoke out against the phrase "poor people of Jamaica", saying that it was creating a "psychology of poverty", which had quickly become a part of the Jamaican culture.

"I have been listening for some time to many politicians and persons in the media who consistently use this term: 'poor'."

While growing up in Jamaica, Wilks said there were people who were poor, but "they never thought of themselves as being poor".

"It has got to have a psychological impact on someone when you start to believe you have no control over your situation," the Silver Pen winner said.

Wilks is working on her master's degree in education, supervision and leadership at Western Carolina University. She said one of her professors introduced her to the concept of learned helplessness and one day she decided to put pen to paper.

"I was just expressing how I feel, and I feel very strongly about that," she said.

The master's student is also a teacher at St Catherine High School. She teaches sixth-formers economics, as well as business to grade nine students. This is Wilks' first year teaching business.

Wilks said she received positive feedback to her letter from Jamaicans, as well as persons in other countries such as England and Canada. She said many of the responses came from individuals who said they felt a "strong connection" to her letter.