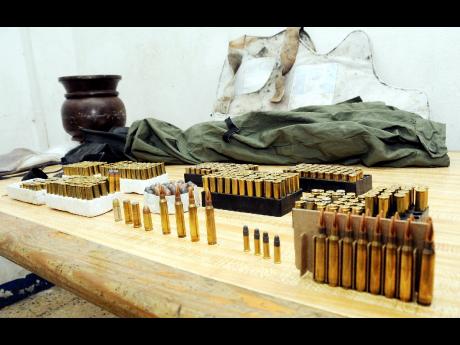 These items, a bullet-proof vest, 412 rounds of ammunition and army clothing, were recovered by the police during an operation in the 'Back Bush' community of Mountain View yesterday. - Ricardo Makyn/Staff Photographer

The Kingston East police yesterday seized a total of 412 rounds of assorted ammunition on 100 Lane in an area known as 'Back Bush' in Mountain View, St Andrew.

The police told
The Gleaner
they were on an operation in Back Bush about noon when gunmen started to shoot at them. They say attackers retreated into the nearby Wareika Hills when they returned the fire.

During a search, the ammunition, along with army fatigues and a bullet-proof vest, were found. The rounds seized are used in M16 rifles, .357 Magnum revolvers and 9-mm pistols.

"This forms part of the anti-crime initiative, which deals with drugs, extortion and guns," said Deputy Superintendent of Police Hornet Williams, operations officer in the Kingston East Division.

"We are going all out to deal with the problem. We will not retreat," he added.

Williams said at least five persons are being sought in connection with the gunfight and ammo find.

Offering similar blustering talk as National Security Minister Dwight Nelson, the deputy superintendent said the police would not retreat or surrender to the criminals.

Up to yesterday evening, police personnel were still combing the area for the gunmen.