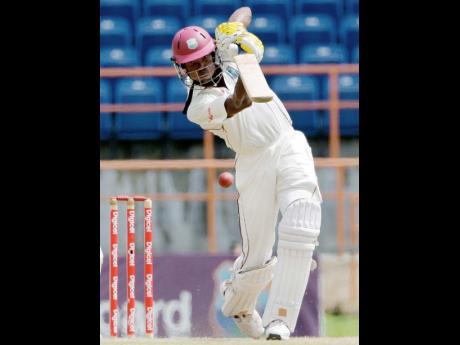 Jamaica were wrecked by a devastating six-wicket haul from rookie fast bowler Corey Edwards as Barbados took a firm grip on day one of their top-of-the-table WICB regional first-class clash here yesterday.

Edwards grabbed six for 41 in a telling burst to send tournament leaders Jamaica tumbling to 226 all out at the Frank Worrell Oval at the University of the West Indies.

The 26-year-old Edwards, in only his third first-class match, shattered the Jamaica top order in spite of captain Tamar Lambert's 41.

Opener Dale Richards then notched a typically confident, unbeaten 63 as the Barbadians replied enterprisingly to reach 113 for one at the close.

All-rounder David Bernard's top score of 55, and spirited lower-order resistance, rallied the innings from the despair of 100 for seven to a more respectable total.

Odean Brown lashed out sensibly in a career-best 33 as the last three wickets added 126 runs.

Earlier, experienced left-armer Pedro Collins made an early strike after Jamaica won the toss and chose to bat on a pitch with generous moisture.

Brenton Parchment chased an outswinger and Richards hauled in an easy first slip catch at 10 for one.

Edwards soon won an LBW verdict as Danza Hyatt played no stroke and Jamaica slipped to 18 for two.

The lively right-armer, son of former Barbados national cylist Hector Edwards, made it 37 for three when debutant Jon-Ross Campbell chased a wide ball and edged to wicketkeeper Shane Dowrich.

Lambert dominated a restorative fourth- wicket stand of 57 with Donovan Pagon as Jamaica lunched at 82 for three. But the innings went into a spiral soon after the resumption as Edwards blasted away the middle order.

Pagon, who batted unfussed for 29 off 93 balls, with five fours, sparked the slide when he slashed at a wide one and provided a simple catch to backward point.

Edwards ripped out Nkrumah Bonner's middle stump with a yorker next ball and although Carlton Baugh Jr survived the hat-trick, he went next ball to give Edwards three wickets in four deliveries and a treasured five-wicket haul.

When West Indies left-arm spinner Sulieman Benn grabbed the key wicket of Lambert, caught low down at slip by Richards, Jamaica were down and out at 100 for seven. Lambert cracked six fours off 71 balls.

But Bernard rallied the late order, adding 37 with Andrew Richardson, 57 with Odean Brown and 32 with last man Jason Dawes.

AT QUEEN'S PARK OVAL
: Windward Islands, responding to Trinidad and Tobago's 263 all out, reached 23 for one at the close on the opening day of their sixth-round match at the Queen's Park Oval yesterday.

At the National Cricket Centre: Guyana, responding to the Leeward Islands' 192 all out, were 45 for two at the close on the opening day of their sixth-round match yesterday.

B. Parchment c Richards b Collins 3

A. Richardson c Hinds b Benn 17

Position:
Barbados trail by 113 runs with nine wickets in tact.