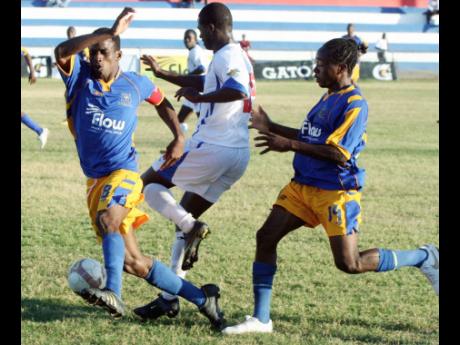 With two rounds of games remaining, Cavalier are in pole position to secure the title which eluded them last year, when they finished runners-up on goal difference. They currently lead the standings with 43 points, six clear of fourth-place Mountain View, with whom they are slated to play a rescheduled game.

Second-place Santos are two points behind Cavalier, while third-place Rae Town now trail by four points, after being officially docked three points for having used an ineligible player in their February 6th encounter against Barbican (20 points).

Last week, Cavalier suffered a shock 2-1 defeat to eighth-place Duhaney Park (22). This was their first home loss of the season.

David Laylor, coach of Cavalier, expects his team to bounce back and win all their remaining games.

"We just have to refocus and come back again, we fell short in the last game," he said. "I guess we were a little complacent.

"We have to win the remaining games, we need at least six points. We know the other teams can only finish on 47 points and we are on 43 points with three games in hand, so we have to just finish strong. We are not thinking about drawing or anything like that, we have to win the games," Laylor added.

In their previous league meeting this season, Real Mona and Cavalier played to a 1-1 draw. Steve Richards scored for Real Mona, while Cavalier's goal came by way of a third minute own goal.

Real Mona currently lie seventh on 24 points, the same position they finished last season. They are coming off a 2-0 win over Maverley/Hughenden (five) courtesy of two second-half goals from Alfred Nelson.

Real Mona, which have already labelled their season as over and have commenced preparations for next season, will be playing for pride, according to coach Peter Moses.

"We have always been a nemesis for Cavalier. They have always found Real Mona at any level to be a challenge, and I think they are going to expect that again, I think our team will push it," said Moses.

"They have everything to gain. I don't think we have anything to lose, but pride is important to us," he added.

Cavalier vs Real Mona at The Spring Complex