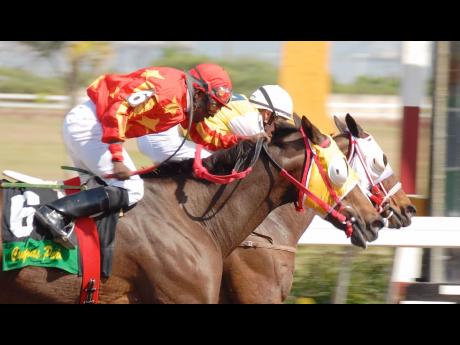 RIGGED TO WIN (inside, Dick Cardenas) gets the better of 17-1 outsider LUCY EDDIE (Javour Simpson) to win the James B. Dawes Memorial Trophy (claiming $450,000-$400,000) over 1300 metres at Caymanas Park last Saturday. A 9-5 shot, RIGGED TO WIN was saddled by Patrick Chng for Arscott Farms. - Colin Hamilton/Freelance Photographer

The three-year-old campaign leading up to the classics heats up at Caymanas Park today with the 16th running of the Hot Line Stakes for fillies and the Sir Howard Stakes for colts and geldings, both over 1200 metres, sharing the spotlight.

Indications are that champion trainer Wayne DaCosta and his stable jockey, reigning champion Omar Walker, will successfully team up to win both million-dollar races with EXCELLENCE in the fillies section and LIFEISJUSTFORLIVING in the colts category.

Nine have been declared for the Hot Line Stakes and seven for the Sir Howard.

The well-bred LIFEISJUSTFORLIVING made a smashing with Walker aboard on February 6, making all in a round-five maiden race to win by 8 1/2 lengths, covering the distance in the smart time of 59.2 behind splits of 23.2 and 46.2 for the first half mile.

The chestnut gelding by Region Of Merit out of Bold Queen will report even better for this race and despite the claims of KRYPTOGRAM and GLOBAL WARMING, LIFEISJUSTOFORLIVING could be something special and is tipped to repeat.

He reports in fine fettle and should hold the very fit GLOBAL WARMING at bay in the drive for home.

The Kingsley Davis-trained GLOBAL WARMING won easily in a good time over 1300 metres on December 23, only to be beaten by a rallying SULAMANI over 1500 metres in a tight photo finish last Saturday. The Burning Marque-Conscious Approach offspring has been administered Lasix for the first time and while this should help his cause, LIFEISJUSTFORLIVING has got to be the choice.

KRYPTOGRAM, who won his only race over this trip as a two-year-old last season, strikes me as the type who will prefer middle and longer distances and should be run off his legs by both LIFEISJUSTORLIVING and GLOBAL WARMING.

Meanwhile, EXCELLENCE, who was an impressive winner over 1500 metres on her seasonal debut, should win the Hot Line Stakes at the expense of the Anthony Nunes-trained WILD TRADITION, who looked a useful recruit when scoring easily on her debut over 1100 metres on February 6.

Significantly, both EXCELLENCE and WILD TRADITION are sired by Traditional, but EXCELLENCE is out of the Reprieve mare Pleasant Company.

Despite that easy win last time out, EXCELLENCE has been administered Lasix for the first time and, having looked sharp in her preparation, will not be easily denied.

Other firm fancies on the card are the DaCosta-trained COMMANDER ZERO to repeat in the first race; ESQUIRE in the second; ALIAS MR. CAT to rebound in the fourth; SHE'S THE ONE to complete the hat-trick over the straight in race six; and MISS ANGELINE (Lasix on) to outfinish old rival MERITS BRITE LITE (Lasix administered) in the 11th and final over 1400 metres for maiden three-year-old fillies.