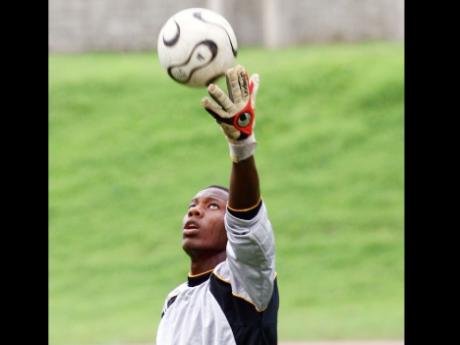 ON ANOTHER day, he would be the man saving the team. On that particular night in Argentina though, goalkeeper Dwayne Miller just could not get it right throughout the Reggae Boyz match in Mar del Plata.

Barely into his 20s, the young keeper who has established himself firmly as second choice to United States-based Donovan Ricketts, kept flapping at crosses all night.

"It was just one of those days," Miller summoned of his uncharacteristic showing.

"Probably at the start but afterwards I was ok, I wouldn't say that was the problem."

Was it the occasion?

"No," the goalkeeper responded. And he wasn't searching for excuses either.

"Generally, I'm a person who don't like to make excuses. It doesn't matter what caused my performance, I need to just work on that and have a better performance."

The Jamaicans lost the match at the Jose Marilla Minella Stadium 2-1 after leading up to the 86th minute.

Ryan Johnson netted for the Boyz in the 68th minute with a well-guided header from the top of the penalty box, after being served a high cross from Lovel Palmer.

However, the Jamaicans conceded an equaliser four minutes from time when Martin Palermo also scored a long-range header, from the top of the penalty box, that squeezed past a slow-reacting Miller, as it skidded just inside the far post.

In the final seconds of extra time, substitute Ignacio Canuto netted the game-winner from a goalmouth melee. Miller had flapped at high crosses twice in the same play, which eventually led to the melee and winning goal.

The Harbour View custodian had earlier made a couple of his customary outstanding saves as pressure mounted on the Jamaica team late in the game - diving to stop a low shot to his right before acrobatically turning a free kick over the goal.

Given that they were up against high, quality opposition, Miller stated his personal satisfaction of playing such a noted football country and pointed out that such matches were good for the national programme, which is geared towards 2014 World Cup Finals qualification.

"It's a dream come true; playing in Argentina against Argentina. It'd have been even better if we had pulled off the victory but such is football."

The Reggae Boyz have only made it to the World Cup Finals once in France in 1998 when they also tackled Argentina in their last senior meeting that the South Americans won 5-0. Jamaica currently hold a FIFA ranking of 78.

"It can only get better from here playing quality teams like Argentina," he said. "We can draw positives like how we can handle the game in the last part."

Miller added: "I think we did well up to a certain point ... but we need to work on our concentration ... the way to handle certain situations in certain times, how to keep ourselves calm, relaxed and have control over the whole situation.

"It just shows that we can manage at that level, it's just for us to go out there with positive thoughts. Games like this only makes us better and have stronger belief in ourselves and the level that we're at."

When Miller lines up between the sticks for the Boyz again, hopefully that will be case and the young goalie who has swiftly moved up the Jamaica ranks won't be having 'one of those days'.