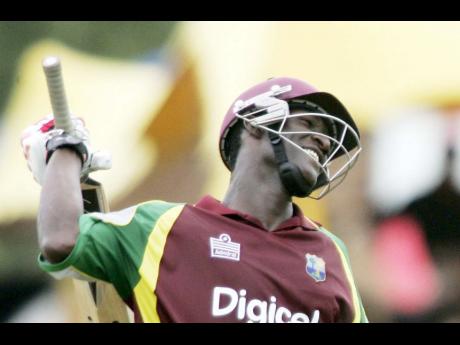 Sammy ... top-scored with 47 in a woeful batting display. - File

West Indies spilled five catches and batted poorly as rampant Australia marched to a 4-0 series triumph after a massive 125-run victory in the fifth and final one-day international (ODI) yesterday.

Electing to bat at the MCG, Australia piled up a challenging 324 for five off their 50 overs and West Indies delivered a tame reply of 199 all out in 36.5 overs.

Entering the match trailing 0-3 and already beaten in the series, West Indies dropped five catches and the continuation of their mediocre batting form on the tour allowed Australia another handsome win, led mainly by their captain Ricky Ponting (61), Shane Watson (51), James Hopes (57no off 26 balls), Adam Voges (45 off 36 balls) and pacer Doug Bollinger (three for 33).

"It's been very tough, we got hammered right throughout the series," West Indies captain Chris Gayle said.

The two teams will now play a pair of Twenty20 internationals in Hobart (tomorrow) and Sydney (Tuesday).

Needing to post their highest ever successful ODI run chase for a victory, West Indies made a tragic start in search of 325 runs and plunged rapidly to 19 for three in the fourth over.

They lost Travis Dowlin leg before wicket for a duck in the first over to Bollinger.

It became 17 for two in the third over when Gayle, immediately after slicing consecutive top-edged sixes off Bollinger, fell to the left-arm pacer for the fourth time in the series and two runs later Narsingh Deonarine was bowled off the inside edge for four, attacking Bollinger's new-ball partner Ryan Harris.

The score dipped to 39 for four in the 10th over when Wavell Hinds (5) tried to pull a short delivery from Harris that rushed on to him and lobbed an easy catch for the 20-year-old debutant Steven Smith running around to midwicket.

West Indies briefly steadied their innings when Kieron Pollard and Lendl Simmons added 41 in a fifth-wicket stand that ended when Pollard was caught by Smith on the square-leg boundary off Adam Voges. Pollard, the West Indies' top-scorer in the series, stroked 45 off 51 balls with four fours and two sixes before departing at 80 for five in the 18th over.

The reigning World Cup champions marched closer to victory when they delivered two quick blows to dislodge Dwayne Smith (21) and Simmons (29). Ramdin (3) was adjudged lbw, giving leg-spinner Smith his first ODI wicket at 135 for eight in the 27th over.

Darren Sammy and Nikita Miller produced a late-innings flurry that delayed the inevitable. Miller stroked 22 off 20 balls and added 55 for the ninth wicket with Sammy, who was 47 not out off 41 balls when Ravi Rampaul (4) was stumped, bringing the lopsided fixture to an end.