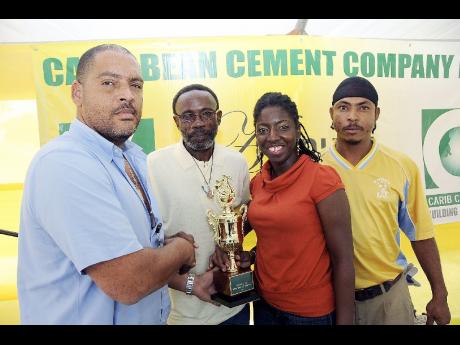 Rex James celebrated his re-election as president of the Jamaica Bridge Association (JBA) by teaming with his long-standing partner, Judy Ziadie, to show why they are the most respected pair in match points bridge by comfortably winning Monday night's leg of the Horace Payne Trophy with a 64.35 per cent round.

There was no bridge on Ash Wednesday, but next week will herald one of the year's major events when the Kurt Reisinger Trophy will be up for grabs in a marathon two-night tournament, restricted to mixed pairs. No doubt, the regularly "mixed" pair of Rex James and Judy Ziadie will start huge favourites to land this prestigious tournament, which will be played at the Police Officers' Club on Monday, February 22 and Wednesday, February 24, beginning at 7 p.m. each night.

Sanstar were desperate to settle the score as they went down to a similar scoreline, away to Prospect, in the first round of the competition. They were rewarded four minutes from half-time when Glenford Reid found the back of the net, after eluding a defender.

Prospect started the second half more purposefully and levelled the scores in the 68th minute. Sanstar regained the lead seven minutes later when Orlando Ricketts got what turned out to be the winning goal. The winners secured the Captain's Bakery Trophy and $12,000.

Wolmer's Boys and defending champions Camperdown High will square off in the final of the Corporate Area Schools Chess Championships at 10 a.m. today at the Campion College Library on Hopefield Avenue.

In the Corporate Area semi-finals, which took place last Saturday at Campion College, Camperdown secured their place in the final after defeating Ardenne High 2.5-1.5. Winning for Camperdown were Tewana Mellace and Creg Johnson on boards 3 and 4, respectively, while O'Shane Reid secured a draw on board 2 against Ardenne's Jonathan Orgill. On board 1, Hakim Buchanan of Ardenne defeated Camperdown's Dayvian Grant.

The other semi-final between six-time champions Campion College and Wolmer's Boys ended in a mild upset, as the boys from Heroes' Circle surprised their more fancied opponents with a 3-1 victory. Winning for Wolmer's were Jordan Carty, Miguel Asher and Jonathan Pitterson on boards 2, 3 and 4, respectively, while Phillip Price won for Campion on board 1.

The winners of the Corporate Area final will contest the national final against the top school from rural Jamaica on Saturday, February 27.

Carr on the double

A double strike by Rayan Carr led Passagefort FC to a 2-1 win over leaders, McCook's Pen in the St Catherine Division One league on Thursday. Carr moved his personal tally to four goals. With the win, Passagefort moved to 15 points, a point below McCook's Pen (16).

In another game, goals by Linton Collins, Gregory Grant and Delroy Smart carried Wanderers (15) to a 3-1 triumph over Lluidasvale (nine). The competition continues tomorrow with Invaders taking on Royal Lakes at Pleasant Farm, at 3 p.m.

Homestead Under-25, Portmore Gardens, Winchester and Claremont qualified for the national round of 16 in the Insport All-Island Community Football Championship after being crowned respective parish champions, last weekend.

Homestead took the St Catherine title, thanks to a double strike from Tejay Thomas as they defeated Central Village 2-1 at Prison Oval.

In the day's feature double-header in the old capital, Portmore Gardens took the honours, edging Greater Portmore 5-4 on penalties.

After Andre Dunkley's flashing header in the 25th minute, Portmore Gardens looked set to win with 15 minutes remaining in normal time until a last-gasp goal by Greater Portmore forced extra-time.

In Yallahs, St Thomas, Winchester were crowned parish champions as they rallied from a goal down and forced a shoot-out in which they outscored Cottage Pen 4-2 at Phillips' Field.

Omar Burger gave Cottage Pen the lead after 55 minutes, but Darren Maxwell brought Winchester back on level terms when he hit the target in the 77th minute. Inspired by the equaliser, Winchester held their composure to take the title on penalties.

Hanover will be represented by Claremont who held off Orange Bay to win 2-1 at Watson Taylor Park, Lucea.

Mid-season champs, Racing United (19) should extend their lead in the E-Services-sponsored Portmore Division Two Football League when they meet sixth place, Braeton United (seven), in the feature match of a double-header at the Racing football field tomorrow. Racing have won six games, and drawn one, in eight tries, while Braeton have struggled to win games all season.

In the opening match at the venue, third-place Watson Grove (13), tackle Hamilton Gardens at 1 p.m. In other games, second-place Christian Pen (16), are expected to get the better of last-place Hellshire United (five), in the curtain-raiser at the Christian Pen football field. Two hours later, fourth-place Westport (11), will try to stay in the top four with a win against second-from-bottom, Daytona. Last week's results: Braeton United 2 Hellshire United 0; Racing United 0 Christian Pen 0; Watson Grove 2 Daytona 1; Hamilton Gardens 1 and Westport 1.

Leaders Cumberland (10), will this afternoon hunt their fourth win in five tries when they play strugglers Ascot in the Colin Fagan-sponsored Leander Marshall/Portmore U-13 Football League, at the Portsmouth field at 1 p.m. Cumberland have played well, scoring 12 goals in four games, including a 5-0 hammering of Portsmouth last Saturday. In the feature at 2:45 p.m., third-place Wanderers (nine), should record their fourth win of the season against winless Portsmouth (one).