Jamaica calls for China to advocate for developing countries 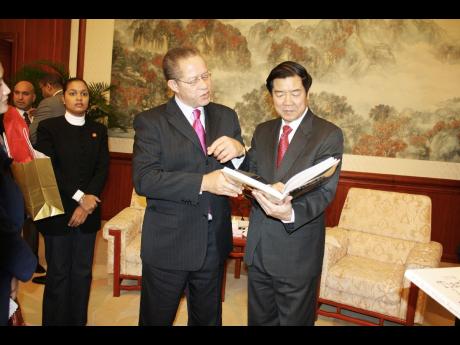 Showing off Jamaica in China: Prime Minister Bruce Golding shows some of the historic places in Jamaica captured in the book he presented to Deputy Secretary of the CPC Tianjin committee, He Lifeng, when he met with him and members of his committee in Tianjin. Prime Minister Golding has proposed the twinning of the city of Kingston and Tianjin and the establishment of a technical programme of cooperation, through which assistance could be provided for the restoration of downtown Kingston. - OPM/Contributed

Earlier this month, Prime Minister Bruce Golding made an official visit to the Republic of China, during which he held talks with that nation's leadership and secured new investments. The following are a few of the stories that came out of his visit.

Prime Minister Bruce Golding has noted that because of China's significant role in the world economy, as well as its understanding of the challenges facing the developing world, countries like Jamaica are looking to China to be their advocate in those corridors, (such as the G20) where they are not allowed to be present.

"We do not sit in the G20. Our voice, where we are allowed to sit, is weak, and so the imbalances in the economic architecture need to be addressed," Golding said.

He was speaking earlier this month when he met with China's President Hu Jintao at the Fujian Hall of the People in Beijing, as he wrapped up his official visit to China.

"It is particularly difficult for countries like Jamaica, which are regarded under the UN classification as a middle-income country and, consequently, have no access to concessionary financing available to poor countries," Golding said. "Yet we are heavily indebted and we have significant elements of poverty that need to be addressed."

He said because countries like Jamaica are excluded from that kind of treatment, they run the risk of seeing the gains they have worked so hard to build over many years, marginal though they may be, eroded with the effect of the global recession.

Golding said countries like Jamaica, which are undertaking policy reforms need access to cheaper funds and should not be considered as high risks. He is of the view that the multilaterals need to look at countries like Jamaica, not only from the point of view of their balance of payments and fiscal challenges, but to include in their assessment a commitment to development.

In his response, President Hu Jintao remarked that, although China sits on the G20, it has not lost sight of the fact that it is regarded as a developing country, and would not hesitate to support countries like Jamaica in answering this call. He expressed the hope that the joint efforts of all concerned would serve the benefit of all developing countries.