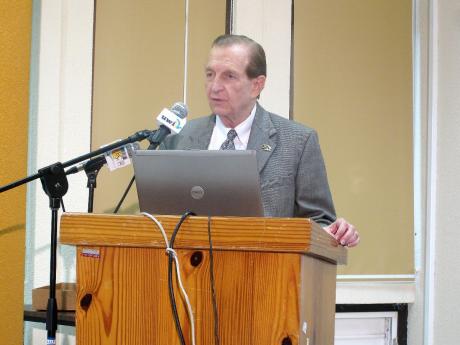 Former Prime Minister Edward Seaga tells the audience the format of his presentation at the 2010 Reggae Conference on Friday afternoon at the Multi-Functional Room, Main Library, University of the West Indies, Mona. - Photo by Mel Cooke

Former Prime Minister Edward Seaga has had an unusually multi-faceted role in Jamaica's music development. He has been a student, producer, de facto talent developer, minister of culture, and has also utilised Jamaican popular music in his political pursuits.

So the Multi-Functional Room, main library, University of the West Indies (UWI), Mona Campus, was naturally packed for his Friday afternoon presentation at the 2010 International Reggae Conference. However, those who came to see and hear Seaga speak about the 'Jamaican music industry as a site of nationalistic fervour' would have been disappointed at having only half their objective fulfilled.

He did speak, but via a recording, taking a seat in the front row of the audience to listen to his narration of an essay covering the development of Jamaican music, that he has used as a CD insert. It was not all talk, though, as before the operator pressed 'play,' Seaga said there were 42 songs - or parts thereof - included in the recording.

It proved a good listen, with Seaga pointing out three landmark achievements of Jamaican music on its official 50th anniversary. The sound system of the inner city has become the disco of uptown at home and abroad, dubbing has spawned the very popular rap genre, and Jamaica's music has had more impact than any other country relative to size.

The broad picture of the narrative would have been familiar to those who have had more than a passing interest in the history of Jamaican music. The real value lay in the fact that the voice that told the story belonged to someone who was there as it unfolded, especially the development of ska, and has the combination of authority, personal insight and involvement. There was also the occasional 'Eddiean' - an off-the-cuff quip that was accurate, humorous and memorable.

So when he spoke of the early sound systems trying to outdo each other with tunes and volumes, Seaga remarked, "Now you know why you can't sleep at nights."

He went through the pre-ska and R&B phases, Theophilus Beckford's
Easy Snappin'
, the first Jamaican song played at the session, followed by Laurel Aitken's
Boogie in My Bones
, which Seaga identified as Chris Blackwell's first recording. The all-important personal involvement was underscored by what Seaga termed "the fourth big song" in 1960,
Oh Manny Oh
, which he produced.

It was the first big hit in Jamaica to be produced on vinyl, he said.

Seaga played another important role in the early days of vinyl, one which - as he tells it - had the unintended spin-off of creating a booming recording industry in Jamaica.

Individual sound-system owners would import records to play exclusively on their systems, erasing the labels and then giving the song another name, to prevent others from finding out the title and by so doing stymie efforts to acquire the song. Seaga, who by then had started his West Indies Records Limited (WIRL), identified many songs and imported them in bulk, among them
Live It Up
, which had been renamed
Beardsman Shuffle
. The sound-system operators, Seaga said, then turned to producing records themselves.

In 1960, he said, Jamaicans had a choice of radio stations, producers and record shops. "All that was needed was a 'riddim' - not rhythm," he said. There are many tales about the birth of ska, he said, but the only one with details is the one around Clement 'Sir Coxsone' Dodd, who asked Cluett Johnson and Ernest Ranglin to come up with a beat. They made 'ska', the name being the abbreviation of a then popular street slang. "It was both song and dance," Seaga said, and performers emerged as if all that talent had been stored in a cupboard.

My Boy Lollipop
, done in 1963, had toes tapping and Seaga related his integral role in moving the beat across the disparate worlds of Jamaican society. He related how he took Byron Lee to Chocomo Lawn, West Kingston - which had become his headquarters in the previous year - in 1964, where Lee saw the Techniques in rehearsal. He learned ska in short order and Seaga dispatched a team including Byron Lee and the Dragonaires, Desmond Dekker, Ken Boothe and dancers to the World's Fair in 1964, armed with the new sound.

The transition to rocksteady was traced to Hopeton Lewis who, not being able to keep up with the rhythm at a recording session, asked the musicians to slow it down. Appropriately, that song was
Take It Easy
.

Interestingly, Seaga linked the emergence of the 'rude boy', long identified with reggae, to another historical event he is involved with in another aspect of his life, the clearing out of
Back O Wall
. The 'rude boy' was the disillusioned youth who encountered the political violence, which reared up after that incident.

The narration continued with reggae, as Dennis Brown's
No Man Is An Island
and
Revolution
were played. Seaga noted that Bob Marley added a new dimension to Jamaican music: the emphasis on lyrics.

Seaga picked up the dancehall thread from December 26, 1956, when Count Matchukie dropped the first patter; King Stitt and then U-Roy's early forays; its retreat in the 1970s and reappearance in the latter part of the decade with Michigan and Smiley, followed by the surge in the 1980s with King Yellowman. From there, it was a merry trip to Shabba Ranks and the story of Jamaican music, as narrated by Edward Seaga, continued.

The all-important personal involvement was underscored by what Seaga termed "the fourth big song" in 1960, 'Oh Manny Oh', which he produced.