Viagra to the rescue! 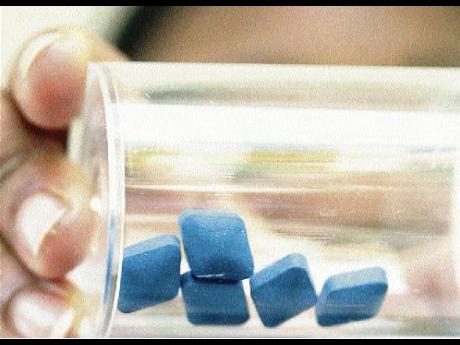 Since its creation, the little blue pill, Viagra, has been like the Holy Grail for men with erectile dysfunction (ED).

Some men swear by its potency and Jamaican men have ceased to feel shy about asking for it. However, picture a Viagra user, and a man in his late 60s immediately comes to mind (aah, stereotypes). But some 'young' men don't believe it is only for the older boys, and seek prescriptions for the drug.

However, urologist Dr Trevor Tulloch, reiterated that Viagra is a treatment for men with ED, and you usually don't see men under the age of 40 suffering from that condition.

"The youngsters are using it as a recreational drug...like alcohol," he said. He further pointed out that Viagra should only be prescribed to the prospective patients after they are evaluated and all other possible conditions are ruled out or treatments are diagnosed. He warned that only in that context should it be used.

Dr Tulloch also notes that in its earliest stage, Viagra was used to treat patients with heart and lung problems, but it was the sexual side effect that made it popular. Side effects can include indigestion and gas, a blocked nose, headaches and colour distortion (some men seeing objects in blue or green for a while). To say it's strong stuff is an understatement.

Occasionally, reports surface in Jamaica that even teenage boys have been using the drug as they 'firmly' believed in being able to satisfy the opposite sex. But Dr Tulloch was adamant that he would not prescribe it to a man who did not need it. He gave an example of one possible side effect - that of a sustained erection. He reasoned that a man who does not have ED would be in trouble as he had no difficulty 'getting it up' in the first place.

But there seems to be no stopping the popping of the blue pill, as Dr Tulloch noted that men simply get it on the black market. He also warned that there are Viagra 'substitutes' that are brought into the island with similar sounding names. He said some of the buyers don't even realise they are purchasing a knock-off.

Viagra is not to be taken with nitrates as this combo may cause a sharp drop in blood pressure.

It is best not to mix Viagra and alcohol; just in case.