'FINSAC enquiry will go on' 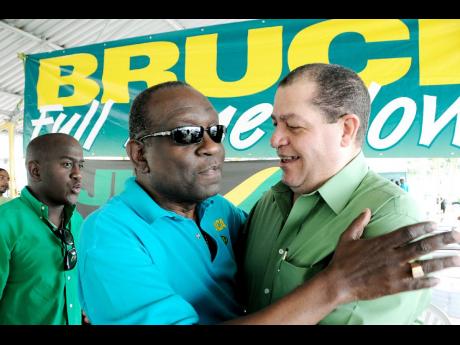 Finance Minister Audley Shaw has vowed that the Financial Sector Adjustment Company (FINSAC) commission of enquiry will be completed despite what he says are attempts to derail the process.

Taking dead aim at former Finance Minister Dr Omar Davies, Shaw yesterday claimed that there were persons who wanted to see an end to the probe into the financial-sector meltdown of the 1990s and the subsequent creation of FINSAC by the then People's National Party (PNP) administration.

"Omar Davies and a clique don't want the commission of enquiry to take place because there are lots of questions that have to be answered," Shaw, a deputy leader of the Jamaica Labour Party, told delegates at its Area Council One meeting in Papine, St Andrew, yesterday.

"But what I want to tell the country today is that we are not going to allow Omar Davies, the PNP or a band of people who have colluded to try to suppress the truth. This Government is going to ensure that whether it's today, tomorrow, next week or next year, there will be the completed commission of enquiry," Shaw said to loud applause.

"We are not going to rest until we are told the truth, the whole truth and nothing but the truth," added Shaw.

However, the claimants have made it clear that their grouse is with the present commissioners, and that they do not oppose an enquiry
per se
.

Just over one week ago, the Supreme Court granted an injunction stopping the enquiry until a determination is made by the Judicial Review Court.

Meanwhile, Shaw said he was the director of a company, Shaw's Hardware and Trading, which fell victim to the high interest rates and was - as detractors of the Government bailout vehicle term it - Finsac'd.

He also denied claims that he received a debt write-off from FINSAC.