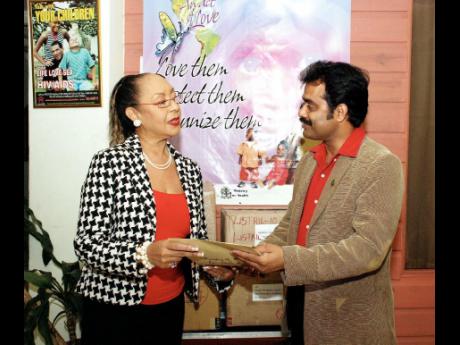 Contributed Dr Marion Bullock-Ducasse, director of emergency, disaster management and special services in the Ministry of Health, accepts the documents related to $18.7 million...

THE WESTERN Jamaica-based pharmaceutical company, Indies Pharma, has donated prescription and non-prescription drugs to the Haitian-relief programme valued at $18 million (US$207,500).

The Jamaican-owned organisation has already handed over the medical supplies to the Ministry of Health, company chairman Dr Guna Muppuri told
The Gleaner
.

"When I saw those pictures in the media, especially the children and elderly, I was totally disheartened and said to myself, 'As a good corporate citizen, it is my social responsibility to do something that must really reach the end-user and alleviate their suffering'," he said.

According to the physician, he could see the suffering of the people of Haiti went beyond the physical injuries, and so he compiled a stock of iron, vitamins, proteins and calcium supplements, tonics, oral antibiotics for children and adults, and cough medicines.

He added that consideration was made for asthmatic sufferers, and so liquids and inhalers and anti-allergy medications, both oral and skin formulations, were placed in the stock.

The other drugs include painkillers and fever medications, anti-hypertensive and anti-diabetic drugs, and even drugs for epilepsy.

"We clearly saw that there was a serious humanitarian need at our next door (Haiti) and the God has given us the willpower, resources and more than that, the heart to give something to our neighbours in the name of Jamaica," said the doctor who operates from the Second City, Montego Bay.

In response to the gesture, director of emergency, disaster management and special services in the Ministry of Health, Dr Marion Bullock-Ducasse, said the drugs were badly needed.

"Immediately after the earthquake, there was need for immediate medical care to deal with the magnitude of trauma."

She said Indies and a number of other pharmaceutical companies in Jamaica were filling a void.

"We sent the entire donation the very next day. The team was very happy to have it to treat the patients effectively."

Currently, there is a team of 28-30 Jamaican medical personnel in Haiti.

According to Bullock-Ducasse, the situation in Haiti is improving with health care, but there was still a challenge in terms of the population's access to care. She was, however, heartened that a number of outreach programmes were being implemented.