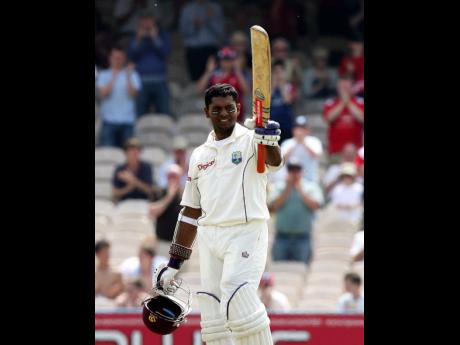 Shivnarine Chanderpaul's 52nd first-class hundred put things in train, and purposeful bowling put Guyana on the verge of their first win in the last three seasons in the WICB regional first-class championship yesterday.

Chanderpaul completed a typically resolute, undefeated 105, as Guyana were dismissed for 287, replying to The Leewards' first-innings total of 192 in the first hour on the third day of the sixth-round match at the National Cricket Centre.

Leg-spinner Davendra Bishoo then captured four wickets for 46 runs from 20.2 overs, Esuan Crandon snared three for 34 from 14 overs, and Veerasammy Permaul took two for 54 from 17 overs, as The Leewards were dismissed for 192 in their second innings about 20 minutes after tea.

The Guyanese, chasing a modest victory target of 98, nervously slipped to 49 for three at the close.

AT QUEEN'S PARK OVAL:
Adrian Barath continued his comeback from injury and helped Trinidad and Tobago's (T&T) push to finish the season strongly to take shape against The Windward Islands yesterday.

Barath followed up his first-innings 59 with 79, as T&T, leading by 75 runs on first innings, declared on 297 for six in their second innings at tea on the third day of their sixth-round match at Queen's Park Oval.

T&T then tightened their grip on the match, when The Windwards, chasing a highly improbable, if not impossible 373 for victory, were reduced to 129 for five at the close.