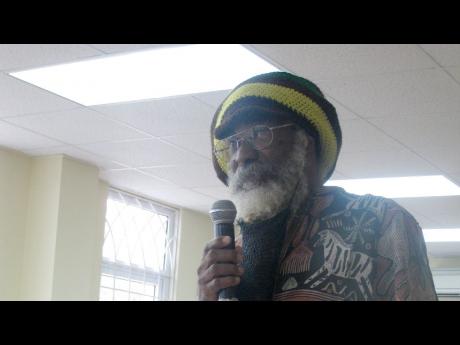 Tekla Metfet, who presented this year's Bob Marley lecture last Thursday evening at the UWI's undercroft, makes a contribution in a subsequent session of the 2010 International Reggae Conference. The conference ended on Saturday, with a number of presentations in the Assembly Hall on the campus. -Photo by Mel Cooke

Deputy Principal Joseph Periera of the University of the West Indies (UWI), Mona campus, asked Tekla Metfet to stand beside him briefly as he introduced the night's presenter at the UWI's undercroft last Thursday. Periera did so for the purpose of illustration, telling those gathered for the annual Bob Marley lecture, "you see why they did not appoint him principal".

The 'they' are the powers that be at a well-known community college.

"Tekla has had to struggle, having trod through the world suffering all the pressure, all the rejection in the world," Periera said of the Rastafarian. "But he is here today to give the Bob Marley lecture and I am pleased to introduce him."

Metfet wove Marley's lyrics into his topic, 'Rastafari-Reggae Bob Marley: Africa Scattered for Rhythm of Oneness for the World'. The lecture was part of the biennial International Reggae Conference and attracted a substantial audience.

However, with Metfet's bringing a wide span of philosophy to his subject and weaving in Marley's song titles and lyrics extensively, the lecture - which started late to boot - was longer than the attention span of the bulk of the audience. By the time he had finished, a mere handful of persons remained seated. Nearing the close, Metfet acknowledged that it was "the wrong time of night they have put me on to talk about this. But we have to let the children know".

Wrong time or not, Metfet went through an impressive process in pulling together various strands - much like a plant's roots - to nurture his arguments and support one of his major closing points that Christopher Gonzalez was right to have depicted Bob Marley as a singing tree. And here Metfet quoted yet again from Marley - "I an I a the root".

At the start, Metfet had declared "Egypt is the wayward daughter of Ethiopia" and invited his audience to "let us take a look at Bob Marley's Babylon". He organised the lecture in four parts: history, the idea of the city and the concrete jungle, Babylon and the battle for the mind and the Babylon system worldwide.

In defining Babylon, Metfet dismissed the democratic election system in which there is a juggling of the actors, but the executive producer is always big business. There were other notable lines from Metfet, such as the Jamaican idea of being somebody is being someone else. Among the philosophers to whom Metfet referred were Thomas Hobbes and Friedrich Nietzsche, and he gave seven concepts of Africa, among them ancestral worship, the distant past is the present and now, the extended family and rhythm.

And despite his extensive references in relating his life to the topic, Metfet said he had experienced Bob Marley's Babylon. "I am not an academic. I do not study Rastafari; I live Rastafari," he said.