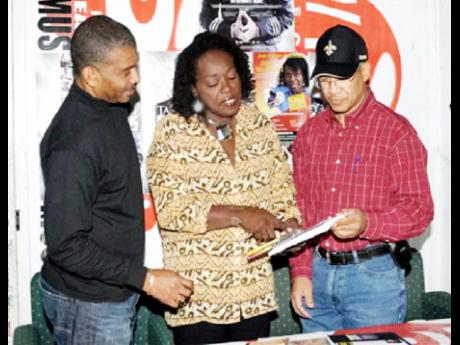 With the inking of this deal, VP records will now handle the distribution of Hutchinson's work in North America, Europe and the Caribbean.

According to Hutchinson, being signed to VP is an idea whose time had come, as the hunger for her material in these markets will now be satisfied. Her 7 CDs include two of Jamaican proverbs, one each of Jamaican love poetry and Anancy stories, plus the wonderfully hilarious Hutchinson-style social commentary and comedy in her poems and dramatic monologues. Her latest release is
Kin Teet Kibba Heart Bun
- a celebration of the creativity of Jamaican 'poor' people, released as a book and CD.

VP Records, which distributes several international recording artistes, also handles the work of cultural icon Louise Bennett - Miss Lou - as well as that of comedic duo Ity and Fancy cat. However, according to Chung, there is a need for more of the type of material which Hutchinson delivers.

Hutchinson's North American manager, Eddy Edwards of Roddims Marketing and WAVS, was quite excited about the signing of Hutchinson to VP. "This was waiting to happen," he said, "Joan Andrea is well loved and respected all across the Diaspora as an authority on Jamaican culture. VP will now help to quench the thirst for her published and recorded works."

And what is next for the 'always-creating-something' Joan Andrea Hutchinson? She is running with the recommendation from VP Records to produce a DVD of her work, with the hope of launching by summer.

"The material is ready and I am ready ... I'm just hoping to get the sponsorship to make it happen," she said while insisting, "come hell or high water, it will happen because it must."

The DVD will include some of her popular works such as
Rapunzel
- the skit originally performed in Laugh Jamaica, plus comedy, storytelling, poetry, folk songs, proverbs and Anancy stories.

Her vision for the DVD is that it will become a favourite among Jamaicans in the Diaspora, seeking to remember and maintain contact with Jamaican culture, and persons wanting to learn about or conduct research on Jamaican culture.