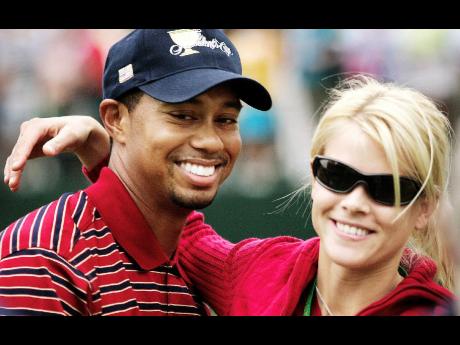 United States golfer Tiger Woods gets a hug from his wife Elin Nordegren on the 18th green at the Presidents Cup in Gainesville, Virginia, in this September 24, 2005 file photo.

THE ONGOING furore over the plight of Tiger Woods, the quintessential golfer, has impelled me to reflect upon the eagerness of many people to condemn others.

On this matter of condemnation, one should focus one's attention on the biblical woman who was caught in the act of adultery.

In this setting, the Pharisees and scribes brought her to Jesus to be tried and subsequently to be stoned to death.

Jesus, in his infinite compassion, shocked and confounded the self-righteousness of the Pharisees and scribes when He said: "He that is without sin among you, let him first cast a stone at her."

According to the Gospel of John, when the Pharisees and scribes heard these words they were so convicted by their own conscience that they dispersed "one by one, beginning with the eldest."

Isn't this biblical situation synonymous to what Tiger Woods is now facing? There is no doubt that Tiger Woods was involved in the act of adultery, and no one should condone this act. But the self-righteous unforgiving lynch mob that is eager to inflict punishment on him should also not be condoned.

There is no doubt that the judgmental horde who seem to clothe themselves in the protective armour of self-righteousness are probably guilty of more repulsive transgressions than Tiger Woods.

We should all endeavour to act like Jesus who never condemned or spurned a sinner. Indeed, He had a great affinity for sinners without condoning their sins.

It, therefore, behoves everyone of us not to condemn Tiger Woods or anyone who is guilty of either indiscretions or transgressions. Instead, we should reach out and pray for their redemption.