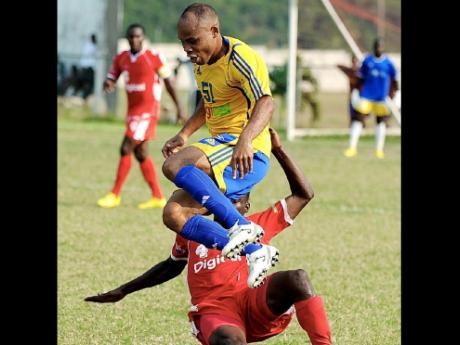 Tivoli's coach, Lenworth Hyde Snr., who was at the time not aware that Harbour View - which took an early lead against August Town eventually lost and in the process relinquished the lead - immediately remarked that his team was ready to bring the fight to Harbour View.

"If they want to win the title they have to win all their games," said Hyde. "That's the goal we have set for ourselves."

Tivoli's rise to the top - the first since surrendering that lead mid-way the second round, was significantly aided by Harbour View's away loss to the most improved team since the latter stages of the second round - August Town - who have now blossomed to sixth place.

Both Tivoli and Harbour View are on 51 points, but the champions have a mathematical edge of nine goals. Four of those poured in much like the rain which set in at the half-hour mark and continued right through the interval, until it receded midway the second half.

Roland Dean, who came on as a substitute for Reggae Boy Navion Boyd, made most of a second-half rout with two goals in the last 10 minutes of play.

The pivotal win was set up by Dane Kelly's header from a short corner, taken during the showers in the 50th minute. It was probably made safe about the time the rain had subsized to a drizzle when Thompson, who had a later say in both of Dean's goals, muscled his way past the challenge of young goalie Andre Blake for a tap-in in the 67th minute.

Kelly's goal, which broke a spirited battle between the two sides in the first-half, was probably missed by most of the spectators who had earlier sought cover from the rain under the stands and cordon of trees behind them.

With Tivoli able to manoeuvre the wet conditions and demon-strating stronger 'bench' strength with the injection of Dean and Irvino English, Sporting's ability to match them were further derailed by the loss of defender Gregory Lewis in the 59th minute.

The Sporting management - whose executive member Brandon Murray was ejected - seemed outraged by the female assistant's beckon to referee Valdin Legister for an alleged striking of a Tivoli player, and it remained their bitter moot point as the decisive factor when the tide changed against them.

Sporting's Assistant coach, Nigel Stewart, said: "With this four-love, we're going to have to motivate the team. We still have quite a few games, so we can't hold down our head."