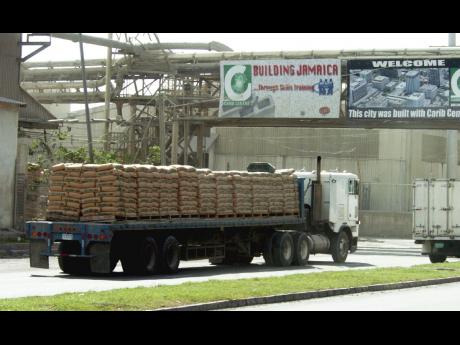 A truckload of bagged cement leaving the Caribbean Cement Company's Rockfort Plant in Kingston, in this May 2006 Gleaner File photo.

It appears there is no end in sight for the ongoing conflicts involving two key players in the local cement trade, with competition watchdog, the Fair Trading Commission (FTC), confirming this week that major importer of the product, Tank-Weld Metals Limited, has lodged a complaint against Caribbean Cement Company Limited (CCCL), alleging misleading advertising on the part of the Rockfort, Kingston-based producer.

The complaint, filed last week by the law firm Hart Muirhead Fatta, on behalf of the Chris Bicknell-led Tank-Weld, is asking the FTC to rule on whether CCCL is in breach of the Fair Trading Act with respect to its manufacture, marketing and sale of the Carib Plus brand of portland pozzolan cement.

The action comes after CCCL hauled Tank-Weld before the Anti-Dumping and Subsidies Commission (ADSC) late last year, requesting a probe into "the sale of unfairly traded cement" in Jamaica. The product, CCCL argued, was being sold below its cost price. And while a release from the cement manufacturer at the time did not name Tank-Weld, the product it wanted probed, Vulcan, is distributed in Jamaica by the Bicknell-run construction outfit.

Tank-Weld has responded to the charge, denying it. No ruling has yet been made.

Now, Tank-Weld has taken issue with its competitor's use of the word 'plus', used in the marketing of the Carib Cement Plus brand, and

printed on the 42.5-kilogram and 1.5-metric tonne bags of the product.

"It is submitted that, in the context of this background, the word 'plus' in this new brand 'Carib Plus', amounts to a representation which immediately conjures up, in the mind of the ordinary and reasonable member of the Jamaican public, an image of a new cement product that has superior strength, relative to the regular

'Carib Cement' that has been sold over the years."

"In other words," the complaint said, "By this representation, the ordinary and reasonable member of the Jamaican public is led to believe that Carib Cement is 'regular'' cement, and that, relative to that 'regular' cement, Carib Plus is a better cement in terms of strength."

Tank-Weld said it has shelled out money to conduct its own tests on the CCCL products and that the results disprove what it said was their manufacturer's representation.

"Now, with Carib Cement Plus, you will have concrete with a higher late strength and more durability, thus resulting in a better and stronger finished product," the online CCCL marketing blurb said.

"By adding pozzolan to our production process, we have not only improved the properties inherent in our cement, we have also improved our efficiency in production, thus lowering our operating costs," it added.

Head of the FTC, Dwayne Miller, told
Wednesday Business
that the agency would be carrying out an independent assessment, after which it would be seeking the views of CCCL and additional information from the complainant, if necessary.

"The next move will depend on what our views are," he said.

"We will be asking Carib Cement to respond, and then we will be making the necessary recommendation when our investigation is completed."

Up to yesterday, CCCL officials seemed unaware of the charge.

"I will not be able to comment on that right now. I don't know about it," public relations officer, Lystra Sharpe told
Wednesday Business
.

She explained, however, that the Carib Cement Plus product,

a blended type of cement, was not new but is different to ordinary portland cement (OPC).

The CCCL spokesperson said the blended cement is not rapid hardening but had what she termed "increasing later strength".

She said the cement type constituted most of the product sold in Jamaica.

"It is really just a small sector which demands OPC, because its quicker drying. Block-makers want OPC because the turnaround is faster. But for the general building trade, Carib Cement Plus, which is a little cheaper, is what is bought," she said.

Carib Cement, which was at one time a government-owned company which is now owned by Trinidad Cement Limited, had the monopolistic carpet swept from under it in 2006, at the height of a crisis sparked by the company's release of over 550 tonnes of faulty cement into the market in late 2004 and early 2005.

The 40 per cent safeguard duty that had, up to then, protected the producer against imported cement, was yanked by the Government, allowing hardware merchants such as Mainland International, Arc Systems, Buying House and Tank-Weld Metals to enter the market over time.

The Government has since assured CCCL of 80 per cent share of the market for CCCL, allowing other importers to continue bringing in 20 per cent or 170,000 tonnes of the required cement.