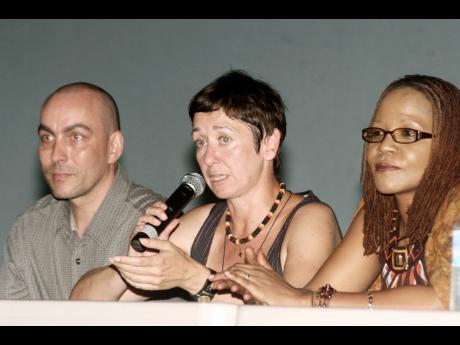 Ellen Köhlings (centre), editor of Germany's 'Riddim' magazine, makes a point at the International Reggae Conference held at the University of the West Indies, Mona, last Saturday. The topic was 'Jamaican Music in Europe: The Homphobia Debate'. At right is UWI's Dr Donna Hope Marquis and at left is 'Riddim' co-editor Pete Lilly.- Photo by Nathaniel Stewart

With the 2010 International Reggae Conference heading to a close last Saturday at the Assembly Hall, University of the West Indies (UWI), Mona Campus, a German tag team of reggae writers did an excellent job of analysing the situation with gays, Germany and Jamaican music.

Presenting alternately as they gave the historical, cultural and legal setting of the imbroglio in which Jamaican music has found itself, Pete Lilly and Ellen Köhlings of
Riddim
magazine summed up just how Jamaican music is being used by both gay rights groups and the performers themselves.

Although packing in a wealth of information, the presentation was organised and easy to follow, holding the attention of the small audience in the Assembly Hall. In the early stages, they made it clear that they are personally not homophobic, although there are those in Germany who would present them as such because of the artistes who appear in
Riddim
.

Lilly said, "We have to keep in mind that Jamaican culture is alien to a large percentage of our readers. In Germany, it is not accepted to express oneself negatively against any minority group onstage, especially in a violent way. This is coming from a history in which, less than 80 years ago, Jews, communists, homosexuals and Gypsies were among the minorities the Nazis slaughtered en masse. Hence, during the Student Revolution, the slogan was 'Auschwitz never again', Auschwitz being the name of a prisoner camp network in Poland run by the Nazis in which there were horrific mass murders."

The law against homosexuality was repealed in 1994, but it was made clear that homophobic sentiment does exist in Germany and the
Riddim
duo assessed that there seems to be a rise among the youth.

With Bob Marley's death in 1981, the German press declared reggae dead also. When Jamaican music got significant attention again, it was in the 1990s with Chaka Demus and Pliers, Shaggy and Shabba Ranks, with the German press welcoming the arrival of dancehall in the summer of 1993. It had its days in the sun and, when it disappeared from the charts, took up residence in leftist and smaller magazines.

The initial
Boom Bye Bye
uproar was largely confined to English-speaking countries with a significant Caribbean population. Then Jamaican music had another revival with German artistes Gentleman, Seed and Patrice as well as Sean Paul, many listeners still under the impression that it was still the 'one love' message.

Lilly and Köhlings spoke to the magazine's involvement in the issue, referring to the July 2002 story 'Burning All Illusions'. Then came the 2004 murder of Brian Williamson, which gay rights groups termed a hate crime, and the blacklist effort was on. Beenie Man, Vybz Kartel, TOK, Buju Banton, Sizzla, Capleton and Bounty Killer were the performers targeted.

They broached matters of cultural imperialism and unfair expectations, going on to detail the various campaigns (Beenie Man, Sizzla and Capleton were estimated to have lost ?4 million combined at one point) at length. Now, 35 Jamaican music albums have been put on a list of Youth Harming Media, which cannot be available at any outlet that youth have access to - which is everything. CDs by Baby Cham, Vybz Kartel and Sizzla, as well as Reggae Gold and Strictly the Best - compilations are on the list, which does not contain a single American record.

Previously, the only reggae song on the Youth Harming Media Index was Peter Tosh's
Legalise It
, added in 1980. Currently, the state of Jamaican music in Germany is 'pretty sticky' and, without knowledge of the culture, it is impossible to take up a Jamaican CD without thinking of 'hate music'.

And while they said
Riddim
will do what it can to restore Jamaica's image, "Jamaica will have to take action and answer the allegations". It does not help that those allegations are made about a country where buggery is illegal and human rights organisations have detailed violence against homosexuals.