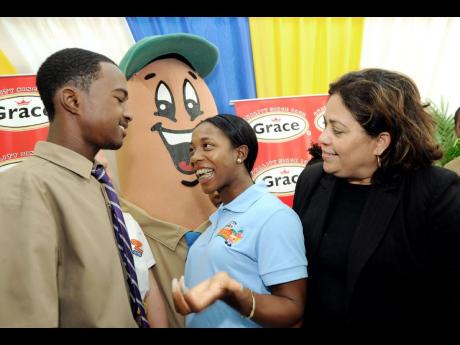 Growing up in Waterhouse, St Andrew, Olympics and World Championships in Athletics gold medallist Shelly-Ann Fraser said her first answer to everything was "whatever".

The 23-year-old was animated, her eyes as wide as saucers yesterday, as she got to the climax of a childhood story.

Fraser is well known to Jamaicans, and the rest of the world, as the Olympics and world champion at the 100 metres. She is also the only female sprinter to hold both titles at the same time.

As an advocate for peace, especially in schools, Fraser speaks out in favour of non-violent conflict resolution. A young woman with a story to tell, she described what it was like for her growing up in a "volatile area".

She said she "lived in a tenement yard" where it was a challenge to head out to school at 6 a.m., because of police-enforced curfews, and where arguments would take place over who would get to hang out their laundry and where.

"It's not like the sun is going to stay at one spot," she said with a chuckle.

The two-time gold medallist recalled chasing her mother to stop her from arguing with a neighbour. She said she would do this despite her aunts' encouragement of "Go, Gracie, go!"

Approximately 40 people filled a room at yesterday's GraceKennedy and PALS press conference on 'A Peace Partnership'. All listened, their eyes glued to the track star, as she gave her own words of encouragement.

"I encourage you all to choose your words wisely," she said.

A member of the audience said quietly to a woman, "The world she speaks about, I don't know it."

To which the woman responded, knowingly, "It exists."

Romario Ballentine, a student at Kingston College, told the audience he used to get in fights at school.

"But I didn't get caught," he said, as some persons laughed.

He, among others, including guidance counsellors, a principal and a teacher, gave testimonials, saying their schools were better off for having become involved with PALS.

A Donald Quarrie High School student with albinism got up from her seat on impulse and stepped in front of the microphone. Unscripted, she interrupted the vote of thanks.

She said she was called 'teacher's pet' a lot because of her complexion. Overcome with emotion, her voice cracked.

"It's very hard to get children to choose the better road," she said.