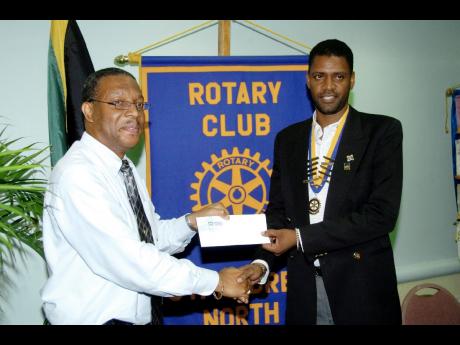 Carlton Barclay (left), assistant general manager of finance, administration and planning at the Jamaica National Building Society, presents cheques totalling US$2,500 to Donovan G. Brown, president of the Rotary Club of St Andrew North, on Monday. The presentation took place during the club's weekly meeting held at the Hilton Kingston hotel in New Kingston. The money will be used to assist in the worldwide eradication of polio and for the club's efforts in Haiti. - Winston Sill/Freelance Photographer

The efforts of the Rotary Club of St Andrew North received a major boost recently when Jamaica National Building Society (JNBS) presented the service organisation with two cheques totalling US$2,500.

"We are delighted by Jamaica National's donation to our efforts," said Brown, who assumed the reins of the service club in July 2009. "It shows we can play our part locally and assist globally."

Brown then handed over the cheque for US$2,000 to Trevor Heaven, district chair for polio, while the other for US$500 was given to Errol Alberga, district governor.

"Our contribution will go a far way in helping the children in Haiti who are further compounded by recent catastrophic events," said Hugh Morris, Jamaica National representative and national coordinator of the Governor General's Achievement Award.

The service club's project is the rebuilding of one of Haiti's largest state schools, Lycée Philippe Guerrier Secondary, located in Les Cayes, southern Haiti. It is expected to benefit 2,800 students.

At the same function, five persons were inducted in the Rotary Club of St Andrew North. They were Duane Ellis, Ann-Marie Curtis, Glenroy Williams, Brian Bonitto and Lynden Mattocks. Mattocks, who was with the club before, was inducted as an honorary Rotarian.

All inductees were welcomed and charged with upholding the tenets of the club and to make their contributions to its objectives and goals through service.