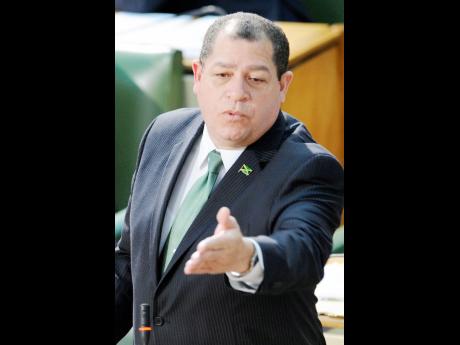 With the Jamaica Labour Party (JLP) approaching the midway point of its term in office, it already has sights firmly set on another election victory.

After 18 years in the political wilderness, the JLP was elected to form the government in September 2007, and on Sunday, one of its senior leaders pointed party supporters to the next general election constitutionally due in 2012.

Deputy Leader and Finance Minister Audley Shaw gave no indication that an early election was in the making, but he certainly set the stage for what JLP insiders say will be the main platform of its next campaign.

Shaw used the monthly meeting of the party's Area Council One to fire up supporters for the second half of the five-year term with a phrase that the country will hear repeatedly as the general election draws closer.

"We need more time to fix the problems facing the country," declared Shaw to cheering Labourites.

"What we have inherited from the PNP (People's National Party), after 18 long years of mismanagement, is a country that is in serious trouble, and I can tell you from today, it is in such serious trouble that we can't fix it in five years," Shaw said, as the audi-torium at the Papine High School rocked to much bell-ringing, the traditional celebration of JLP supporters.

"Over the time to the next election, I intend to be part of a national crusade to ensure that the people of Jamaica understand the full extent of the problem that we are facing," added Shaw.

He told the cheering supporters that unlike the PNP which formed the government from 1989 to 2007, the current JLP administration was courageous and had the political will to find solutions.

"But the problems are so vast, so wide, and so deep, that they cannot be solved in one term or just five years of a political administration," Shaw said.

"One thing I can promise the people of Jamaica is that when the next half of this term is complete, they can say this government is serious because it has identified the problem and, like a good doctor, him write out the right prescription, and the patient is on the road to recovery."

The JLP deputy leader urged the party's supporters to challenge the critics of the Government who, he said, appeared to be forgetting the "mismanagement" of the PNP.

"I warn you today, be careful of what you read and who you listen to, because one of the problems we face in Jamaica is at the level of those who say they are independent commentators ... . One of the major problems we are having in this country is too much intellectual dishonesty.

"Too many people who try to sugar-coat the past and you don't have to go beyond one Sunday to see the sugar-coating. Some of these people who are writing in the newspapers on Sundays calling themselves professors, they are the ones leading our young people astray because they are not telling them the truth," Shaw said, as he referred to a column in
The Sunday Gleaner
.

Only last week, the PNP questioned if US$400 million borrowed from China, and earmarked to fix roads was part of an election campaign by the Government.

This has been rejected by the administration, which has argued that using the money now to fix the roads and repaying it through the Road Maintenance Fund was good business sense.